Once You Frack You Can’t Go Back: Ban Fracking Rally

For the last few weeks, the spectra pipeline plans, combined with news of Cuomo’s support for fracking has created quite a stir.  It is hard to imagine that anyone would think polluting water would be a smart plan for New York state. Yet, it seems the plan is moving forward.

Wednesday,  August 22nd, I joined a few hundred of my closest friends to make a final plea to our Governor 1% as he hosted a policy summit in NYC.

Riding over the action on 53rd and 7th Ave, I thought of all the rides and rallies Times Up! and others have held over the years in support of a more sustainable model of urban living, not dependent on pollution, contamination, and short term profits.  The specter of fracking – which will most assuredly pollute our water supply – terrifies me.

Years ago, perhaps 2009, we started our outreach on the subject with a series of water rides and press conference designed to highlight the need for clean water.  Monica Hunken went to community boards around the city to show a clip from Josh Fox’  Gasland.  We pulled our sound bike around town passing out literature on the subject. Hunken held up glasses of clear water at City Hall declaring she wants the water to stay that way.

Even Tom Ridge had to admit giving your kids water exposed to the pollutants from fracking would be tantamount to child abuse.

April 2010, a group of us, lead by Hunken, met in Times Square to bathe in fracked water. It was dark and full of brown toxics.  It did not seem very welcoming.  Yet, few seemed to be paying attention.

Summer 2011, we held more rides collaborating with more groups attempting to draw attention to the issue.  But it did not feel like enough people were paying attention or taking this seriously.  By this point, the Governor was offering a compromise – only frack and pollute some of the water.  That sounds like kids saying I’m only going to put soap in some of the water in the bathtub.  It doesn’t work.  As activists note: “Once You Frack You Can’t Go Back.”  We have spend most of my lifetime cleaning up the Hudson River after it was polluted. I hope my kids do not have to do the same with New York’s water supply. I hope people do not get sick.  Sloan Kettering does a pulsing business with afflictions few can pinpoint.  Who knows what is going happen if they frack upstate and pollute the water supply?

On Earthday, OWS activists dropped a banner on the highline calling for a fracking ban.

On May 12, 2012, Times Up! help another anti-spectra pipeline ride.  "Bloomberg is trying to fast-track a disaster plan that will leave New Yorkers vulnerable to explosions, carcinogenic exposure, radon risks, decrease in property value and a reliance on an unsustainable fossil fuel,” noted organizer Monica Hunken.  “ We have plenty of alternative green energy resources available to us now and need to stand up against this dirty plan!"

For weeks now, Hunken and OWS affinity group have been organizing actions around the pipeline.

The calls for the Wednesday action explained:

On Wednesday August 22, Governor Cuomo is scheduled to host a policy summit in New York City. This summit appears to be a step forward as Cuomo explores a possible 2016 presidential run. This summit happens as Governor Cuomo appears to be moving forward with plans to allow fracking, possibly before the end of summer, in parts of New York State. This policy summit is an important opportunity for us to send a strong message to Governor Cuomo that if he wants our support when he runs for president in 2016, he must ban fracking in all of New York state.

Arriving at the Sharaton, I heard screams of the crowd down 53rd Street. A group of several hundred activists stood with signs, penned in at the corner of 7th and 53rd.

Activists from all the anti fracking groups, members of OWS, elders, parents and kids – a huge swath of activists were there.

“I am so sick of hearing that we have to do these stupid things – fracking or more prisons -  in the name of economic development upstate,” I moaned to a friend.

“Well, they take the money and then they sell their property and move down to Florida, heartbroken,” noted a friend from OWS. People do not feel like they have any other option.


“The system creates this problem.” 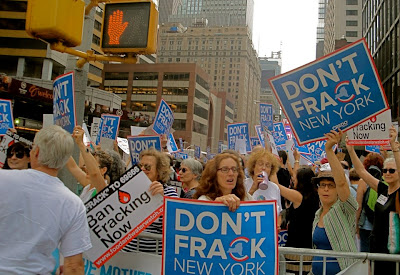 I walked over to my friend JK, who was passing out posters and pens.  I started to write, “BAN FRACKING GOV 1%!!!”

“Put something about the Department of Environmental Conservation, who’ve let this happen,” she insisted.

I talked with Hunken who had already screamed down several of the fracking supporters earlier in the day at the Sheraton.

The crowd began to scream and cheer as an anti fracking banner fell in front of the Sheraton.


The RMO were playing “Whose Side Are You On!” as people sung along following with “Cuomo?” In between songs the visibly angry crowd just began to just scream, “Ban Fracking Now!”  And the crowd followed; several hundred chimed in.  Gradually the RMO started playing the anti- fascist anthem, “Bella Ciao!” as the crowd screamed.

As rally stared to run down, I ran into Jim Fouratt, who has attended several of the anti spectra actions on the West Side Highway where the pipeline is due to begin.


“They are doing this because the Governor is afraid to raise taxes,” noted Fouratt.  Its the only way for the state to raise revenue, he argued nothing that it does not have to be this way.  “Fair taxes is the lubricant of the democracy,” he continued.  “Quality education and social services – they are all based on fair taxes.  Now the Tea Party and Reagan have won the argument that we can’t tax anything.  As result we have policies such as fracking.

I asked Fouratt what they would have done about a problem such as fracking back in the days over four decades ago when he was involved with Gay Liberation Front.

“We would have used direct action,” he followed, noting how happy he was there were this many people out.  “I think people need to get off their computers and stop “liking” things and block some hallways.  Make em step over you.  They are stepping over us now.”

Fouratt noted how impressed with how many people had been out to this action and had been on the West Side Highway staging actions, using colors, arts, street theatrics, etc.  “They are a real affinity group,” he followed. “Affinity groups care for each other and support each other as they do, just as they did in ACT UP.  They provide emotional support.”

Fouratt has been drawn Occupy from the earliest days.  “It is hard for me as an older activist to just listen but that’s what I’ve tried to do with Occupy, to listen, to talk with an us not an I.”   “Thank you,” he says to every Occupier for challenging the whole system which allows this to happen.  “It can be scary but its worth it to fight,” he muses.  “Occupy has been open to the elders and I appreciate that.”

While others have condemned the consensus process of Occupy, Fouratt says it reminds him of his first days with Gay Liberation Front.  “That’s exactly how we did it in 1969,” he explained. “They say there are no leaders in Occupy, but the leaders come through the consensus.”

Riding home from the action, I was both saddened that it looks like fracking is going to happen and heartened by the ongoing community of resistance dating back decades who have taken part in the struggle against the deluge.  I hope the water is going to be ok.
Posted by Benjamin Shepard at 3:11 PM