A few days after the National Coming Out day event to hang the rainbow flag on the Stonewall National Monument, I was tagged in a message from the organizer Michael Petrelis.

There is no dispute that the land inside the wrought iron fence at the Stone-wall National Monument is federal property.


That is why I want to plant a rainbow flag inside Christopher Park this Tuesday, October 17th at 12 noon, so can say a Gay Pride Flag is on federal land.

I totally love our flag flying on the NYC owned flagpole, but I've been on a crusade since June to fly the rainbow colors at the actual and unequivocal national monument.
My hope is that Tuesday's action begins the debate about a more permanent and small rainbow is blowing in the wind 24/7 at Stone-wall.
We deserve this privilege, regardless of flag size and taking into account neighborhood and preservationists concern.
Will you join me on Tuesday and help plant a rainbow flag or two in Christopher Park? At the event we can discuss how not allow the Fake President to deny us access to OUR sacred ground.
See you on October 17th at noon?


Arriving at Sheridan Square on the corner of Christopher Street and 7th Avenue South, Petrelis and Steven Love Menendez, a New York photographer, were hoisting Mendez's rainbow flag inside the park itself.  There would be no mistaking that the flag was inside the park now.

Federal property is for us too, explained Petrelis.
Its been fifty years. Its time, continued Menendez.
The National Parks Department actually paid for the park that is hanging over there, noted Petrelis, pointing to the flag that the feds say is actually 18- inches away from federal property hanging just outside the park that the Obama Administration designated as a National Monument.
I flew out from San Francisco for the occasion, continued Petrelis, referring to the previous week's ceremony in which  thanks to the efforts of activists, such as himself, the flag was to claim a permanent home. This historic event was to mark the first time that the LGBT flag waves over federally-funded land, under the permanent stewardship of the National Park Service.
Stonewall National Monument is located in Christopher Street Park in New York’s Greenwich Village.

The National Parks Service initially supportive of the move. But then thing things got weird. A few days before the ceremony on National Coming Out Day, October 11th, the feds pointed out that the flag pole the flag was flying on was actually  18-inches away, and not technically federal land. They were backtracking.

In response, Petrelis and friends would hang the flag inside the park itself in a gesture of direct action.

When he gets back to San Francisco, Petrelis plans to put in application to have a rainbow flag fly officially inside the park.

The flag Petrelis and Menendez hung inside the Christopher Street Park is a subject of a bit of history itself. Menendez brought it Zuccitti Park throughout to Occupy movement of six years prior.   And it brought people together.  You would see it naked bike rides, rallies and actions all over the city It brought the hippies and the the pot smokers and the queer Occupy kids together, noted Menendez.

Even the activists with Voices for Chechnya, speaking out about human rights abuses and torture of gay people in Chechnya, carried the flag at their march last Saturday.

It is a symbol for freedom around the world.  And it deserves a fly permanently.

Just below the flag a plaque with the following inscription.

"This park is kept living in fond remembrance of those whom we have loved long since, and lost awhile." 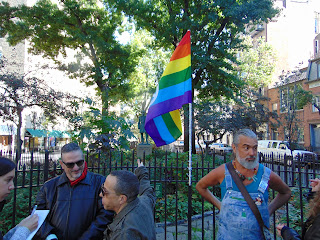 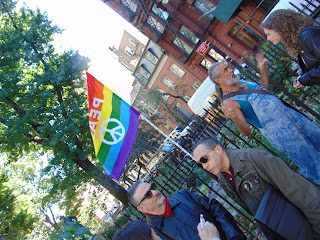 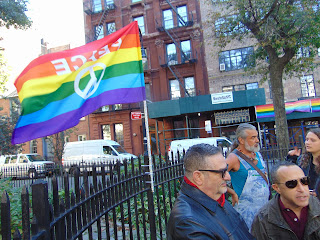 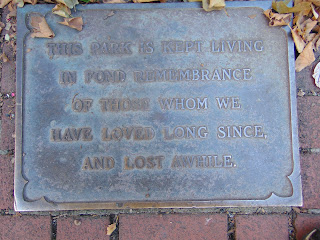 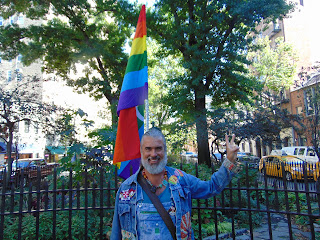 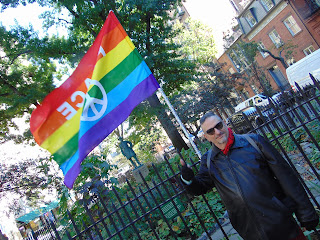 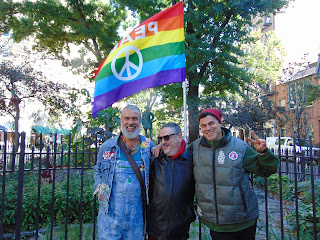 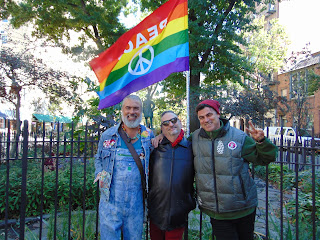