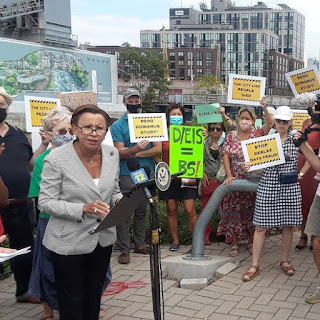 @rep_velazquez says redo the EIS with updated data. The combined sewage overflow is more than we can bear. #nogowanusrezone 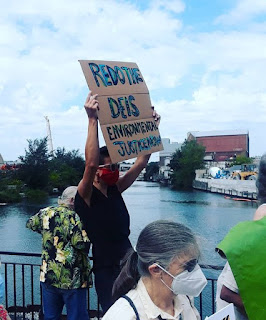 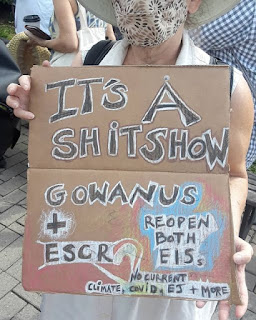 Congresswoman Nydia Velasquez and Assemblywoman Jo Ann Simon held a press conference on the Gowanus rezoning in light of the two recent storms.

Standing at 3rd Street and the Gowanus Canal, local officials and organizers called for the Gowanus Environmental Impact Study be redone with accurate data, modeling, and analysis, before finalizing the #Gowanus rezone.

Before the press conference, Voice of the Gowanus reminded us,

"For the past few months, your neighbors at VOG have been hard at work getting our electeds and the EPA to pay attention to the fact that the DEIS (Draft Environmental Impact Study)—which is supposed to look at the effects of the proposed Gowanus Rezone on the neighborhood's schools, transportation, sewer system, etc—is dangerously flawed.

Even the EPA agrees that the DEIS used faulty data, especially in looking at the effect of rain events in the neighborhood.

THIS MEANS THE REZONE COULD PUT ANYONE WHO LIVES IN OR NEAR GOWANUS IN GRAVE DANGER FROM CLIMATE CHANGE.

At the press conference, Congresswoman Nydia Velasquez and Assemblywoman Jo Ann Simon demanded that the city redo their study properly, involving the EPA as they are legally required, and looking at current  weather forecasts and accurate data.  The Gowanus EIS must be redone with accurate data, modeling, and analysis.  We cannot allow the mayor and developers to ignore climate change and imperil our community.

“The future is now, redo the EIS”

Voice of Gowanus pointed out:

“- Before the rezoning, the Gowanus and other CSO holding tanks (such as at Atlantic Yards) must be built, and details regarding construction and completion must be publicly released;

“- Wet-weather analysis of sewer system capacity must be included in ALL EISs going forward, including cumulative analysis of impacted sewersheds;

“- A review of recent EISs performed over the last 5 years must be done to ensure the inclusion and accuracy of climate change analysis, environmental justice analysis, cumulative analysis and wet-weather analysis;

“- EPA Region 2 and NYS DEC must enforce the CSO Long-Term Control Plans to ensure compliance with the Clean Water Act and other applicable statutes;

“The events of the last two weeks call for data to be reassessed,” said Congresswoman  Velázquez.  Standing with Assemblymember Jo Anne Simon, Velázquez (D-NY) discussed concerns with the City’s Gowanus Neighborhood Rezoning Draft Environmental Impact Statement (DEIS), specifically its failure to account for the consequences of climate change in Gowanus.

“Our city cannot endure more projects that cannot withstand more rainfall,” she followed. “We are calling for actual combined sewage overflow data.  The City must comply instead of concealing.  The effects of two storms setting records for rain fall in the last few weeks, its an issue of sustainability and life and death, she followed recalling the young Gowanus man who was found dead in the canal after the storm. There are no more foreseeable events, climate change is here, she said paraphrasing the governor and president, who had been touring Ida’s damage in Queens, the previous day.

“It’s a shit show,” said Wendy of the GreenMap Systems.

There is still no hydrology study,  said Katia Kelly of the Voice of the Gowanus.

With increased sewage overflow and flooding throughout the Gowanus and NYC, hopefully the world starts to understand the opposition to building housing on a flood plane, along a toxic waterway.

“[A]ctivists are concerned that development along the flood-prone, polluted waterfront could threaten the ongoing cleanup of the canal – as well as the health and safety of the people who live there.

“It’s disconcerting that public officials are so hellbent on building housing on this very dangerous site, instead of finding creative ways to meet affordable housing goals elsewhere in the area,” said Brad Vogel, a member of the neighborhood coalition Voice of Gowanus and one of the rezoning’s most vocal opponents.” 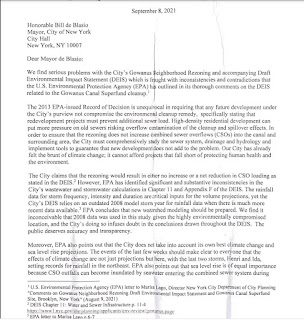 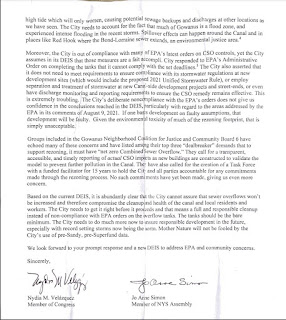 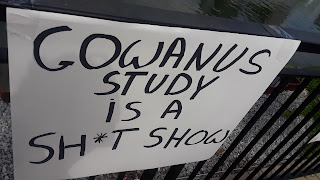 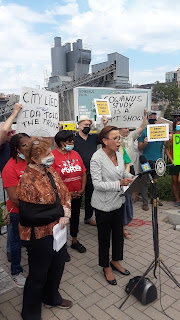 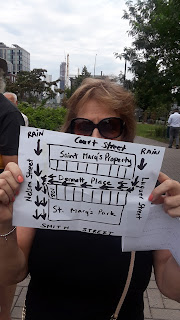 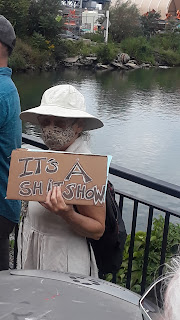 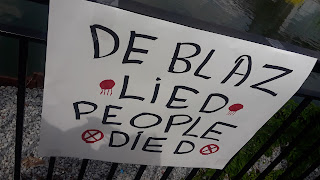 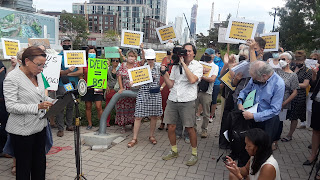 Brooklyn, NY –Earlier today, Rep. Nydia M. Velázquez (D-NY) and New York State Assemblymember Jo Anne Simon held a press conference to voice their concerns with the City’s Gowanus Neighborhood Rezoning Draft Environmental Impact Statement (DEIS). The lawmakers, both of whom represent the Gowanus neighborhood, are urging the City to reevaluate the study, which they argue does not adequately consider the consequences of climate change in Gowanus or combined sewer overflow into the canal Superfund cleanup.

“As I have said in the past, New York City’s infrastructure is not where it needs to be to withstand climate change. Tragically, we saw this again last week with Ida,” said Rep. Velázquez. “When it comes to the Gowanus rezoning the City’s environmental impact statement is wrought with inconsistencies and contradictions, as pointed out by EPA and many groups. And most importantly, it does not properly take into consideration the impacts of climate change on the Gowanus community and on the ongoing cleanup of the Gowanus Canal, which is an EPA Superfund site. That’s why Assemblymember Simon and I are asking the City to revisit their draft environmental impact statement when it comes to the rezoning of Gowanus. This is an issue of environmental justice, a sustainable future, and as Ida has proved, it could not be more important.”

“I join Congresswoman Nydia Velázquez and the community in urging the City to revise the Gowanus rezoning DEIS to address the significant inconsistencies and contradictions identified by the EPA. It is mind boggling that the City thought it could ignore the EPA’s recommendations, and are apparently planning to issue a final EIS this week, without correcting the contradictions and using updated modeling, instead of data from 2008. The City’s recalcitrance in following EPA’s orders for this Superfund site, combined with its use of Pre-Sandy, Pre-Superfund data in the DEIS tells us that NYC is making believe that it can do business as usual.  The City shouldn’t play games with data to evade remediation and costs. Mother Nature will not be fooled.  The City must plan for the future and focus on the public‘s health. In the aftermath of two severe storms that claimed the lives of over a dozen New Yorkers, we must address climate change as the Code Red crisis it is, and act to ensure the health and safety of current and future residents of the area,” said NYS Assemblymember Jo Anne Simon.

On August 9, 2021, the Environmental Protection Agency (EPA) sent a letter to the Director of the New York City Department of City Planning, which points out inconsistencies including a reliance on outdated data in the City’s DEIS and non-compliance issues. That letter is online here.

Today, Velázquez and Simon sent a letter to Mayor Bill de Blasio which cites the EPA’s letter and raises several concerns over the City’s DEIS for Gowanus rezoning.

Below is a quote from the letter:

“Based on the current DEIS, it is abundantly clear that the City cannot assure that sewer overflows won’t be increased and therefore compromise the cleanup and health of the canal and local residents and workers. The City needs to get it right before it proceeds and that means a full and responsible cleanup instead of non-compliance with EPA orders on the overflow tanks. The tanks should be the bare minimum. The City needs to do much more now to ensure responsible development in the future, especially with record setting storms now being the norm. Mother Nature will not be fooled by the City’s use of pre-Sandy, pre-Superfund data.”

Posted by Benjamin Shepard at 12:24 PM