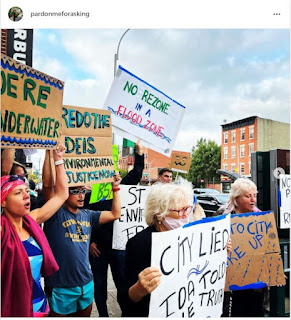 The future of the Gowanus rezoning is anything but certain as community coalition Voice of Gowanus filed a new lawsuit today vigorously attacking the profoundly illegal rezoning, highlighting multiple violations of federal and state environmental law. The suit, filed by Voice of Gowanus, Friends and Residents of Greater Gowanus (F.R.O.G.G.) and area residents, goes far beyond what any other recent neighborhood rezoning challenges have alleged, setting out multiple causes of action.

Attorney Richard Lippes, a veteran of the Love Canal and Three Mile Island environmental legal battles, serves as counsel to Voice of Gowanus. He said the suit rises to another level because of the unique cocktail of health and safety risks and ongoing environmental injustice not addressed by government officials in Gowanus.

“I have tried many environmental law cases in my decades as a lawyer, but the Gowanus rezoning involves an exceptionally egregious set of failures to comply with the law,” said Richard Lippes of Lippes & Lippes, attorney for Voice of Gowanus. “This is one of the most complex cases I have seen: the cascading, overlapping failures to comply with state and federal laws is stunning. This is not your run of the mill environmental case. It rises to another order of magnitude entirely."

“Gowanus is not just any old neighborhood. It has a unique and complex set of dangerous toxic pollution, flooding, and sewage overflow problems that have plagued our most vulnerable populations for decades,” said Katia Kelly of Voice of Gowanus, a petitioner in the suit. “We tried to warn city officials they were getting it deeply wrong—as did the EPA and Congresswoman Nydia Velazquez—but the City refused to listen. Instead they sold out to developers, putting thousands of people unjustly at risk. So, we’ll see them in court. This rezoning is rotten to its core—and it’s illegal.” Kelly is also a member of F.R.O.G.G. and serves on the EPA’s Gowanus Superfund Community Advisory Group (Gowanus CAG).

The suit lays out a litany of failures by New York City agencies, each one a violation of law. First, and most glaringly, City Planning failed to file a Findings Statement regarding the proposed Gowanus rezoning as required by state law. An environmental impact statement alone is not sufficient to comply with the law, and the city chose to treat Gowanus differently than other neighborhoods while violating the law. Second, multiple state and federal agencies such as U.S. EPA were not formally included in the rezoning process as “Involved Agencies” as required.

Fighting to Prevent Real Risks to Human Health and the Environment

“EPA has confirmed that toxic chemicals have migrated off the heavily polluted site of a former manufactured gas plant which was approved for housing and a school under the rezoning. My neighbors and I have raised our families a stone’s throw from the site, and having current and future residents exposed to noxious vapors and toxic contaminants is a grave concern,” said Steve Marcus, of Voice of Gowanus, a petitioner and also a member of the EPA’s Gowanus Superfund Community Advisory Group. “The laundry list of legal failures by the City is deeply troubling, and we felt compelled to act given the many ways this rezoning will endanger human health and the environment.”

The rezoning would subject tens of thousands of people to dire and deadly risks of flooding and exposure to toxic pollution linked to cancer, learning disabilities and other major health problems. Since the two enormous EPA-mandated combined sewage overflow tanks will not be built before the construction of massive new developments is well underway, the rezoning also risks further contaminating the Gowanus Canal and undoing the Superfund cleanup remedy.

Goals of the New Voice of Gowanus Lawsuit

What do Voice of Gowanus, F.R.O.G.G. and residents of greater Gowanus seek as relief with this new bombshell lawsuit?  The suit seeks to have the City Planning Commission’s approval of the Gowanus rezoning voided. It seeks to have all required government agencies at the table to inform any rezoning planning with their respective areas of regulatory expertise. It seeks to have the City of New York comply with all relevant environmental laws, and in so doing, meet the most basic need for environmental justice. It seeks to avoid exposing thousands of New Yorkers to very real health and safety risks.

“The Gowanus rezoning is an unparalleled legal travesty; it almost seems to relish ignoring and violating laws intended to safeguard human health,” said Maureen Koetz, co-counsel for Voice of Gowanus. “Community members have run silent and they have run deep since the rezoning passed. They have done their homework. They are challenging this miscarriage of state and federal legal process. And they are eminently right to do so to protect all New Yorkers from such flagrant environmental injustice and abuses.”

Posted by Benjamin Shepard at 12:19 PM