Reflecting on the 1992 Riots in Los Angeles 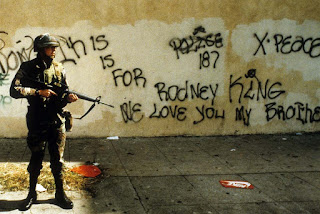 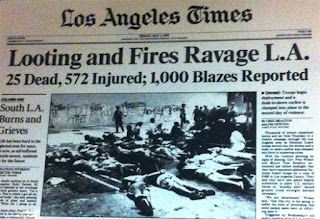 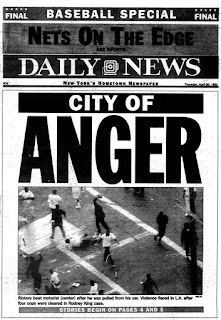 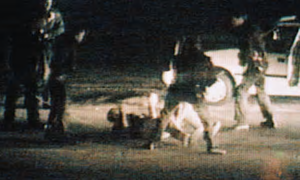 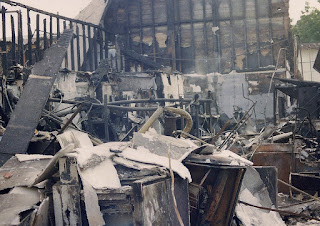 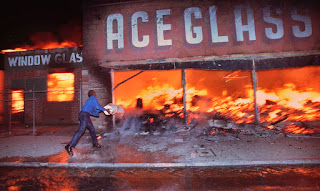 “[T]he designers of malls and pseudo-public space attack the crowd by homogenizing it… They set up architectural and semiotic barriers to filter out ‘undesirables’. They enclose the mass that remains, directing its circulation with behaviorist ferocity… lured by visual stimuli of all kinds…”
Mike Davis, City of Quartz, Excavating the Future of Los Angeles, 1990, p. (226).
My new novel includes a chapter about Los Angeles 1992 when an art show called helter skelter and riot broke out, waking up the world.  Exposing the dirty little secret of the lingering problem of racism in the USA, the riot reminded us all there was more to do.  And many spent the next quarter century doing the work. Back in 1992, it was jarring.

All spring long, we followed the case of the police officers who beat up Rodney King.  Everyone had always told us don’t drive through South Central.  With the riots, South Central came to us. It screamed this is not ok.  A city divided will burn.  This racism is a cancer that will eat away at the body of the city. We all saw videos of the man lying face down on the pavement.  There were only a few more weeks to go in school. We’d been studying Viet Nam in Brodie’s US history class, reflecting on people being left behind.  Things were getting odd with the trial, which had been moved to Semi Valley away where King was beaten. The day of the verdict, a palpable disgust filled the air.  But instead of sitting with it, people acted up, as they had in 1965 in Watts.  It was beautiful and horrible to watch the smoke rise in the distance after the city began to blaze.
The headlines from the April 30, 1992 page-one headline of the L.A. Times declared: “All 4 in King Beating Acquitted, Violence Follows Verdicts; Guards Called Out.” The headline was accompanied by photos of relieved baby-faced police officers hugging one another to the left and rioters against a backdrop of flames to the right. The night before, we’d watched 5 o’clock news commentators attempting to grasp the significance of the unrest erupting across the city. Our experience of these riots and the other uprisings of the era—the Fall of the Wall, etc.—was filtered through cloudy media lenses.   But the image of the fires and smoke rising from downtown felt very real.  This could not remain a divided city.  If the city was going to ignore the poverty and desolation.  Over the next few days, riots spread throughout the city, including to Beverly Hills where Grant and his sister watched armed police seem to take over.
“There are riots cops down the streets, here in Beverly Hills,” Grant reflected in awe. The infection below the surface of the city had exploded for everyone to see.  The inequality, that everyone seemed to ignore, was not to lay dormant.
On  campus, we hit the streets.   “It’s been 400 years baby! 400 years!!!” noted a fellow student, who was African American,  as he sang and chanted with the others, out in the street. The cathartic plea during the post-verdict street actions during the riots in Los Angeles in 1992 spoke to a collective hope for something else, possibly we could find our way together. The expression seemed to be a cathartic release.  Looking out there, we saw that a cancer at the center of Los Angeles that could not be ignored, without more riots.  There had to be an alternative to the state-programmed default of gang life, drugs, violence, and prisons,  But we did not know what it could be.  But there had to be more than a warfare state characterized by mass incarceration, HIV/AIDS, police corruption and brutality, and widespread loss.  There was something telling about being moved to take the streets, even if one could put words around what that desire means.   After students were ripped out of their cars, the campus was quarantined. When the policemen accused of beating Rodney King were tried in a suburban court by ten white people, one Hispanic and one Filipino woman—and no black jurors—the ensuing acquittals invoked a stinging sense of betrayal. Only 13 years before, in 1979, the San Francisco White Night Riots occurred, when a jury that lacked a single gay juror gave former policeman Dan White a slap on the wrist for the murders of Mayor George Moscone and Councilman Harvey Milk. Citizens in 1979 and 1992, in San Francisco and L.A., had maintained faith that criminal justice would do the right thing.


After the LA riots America's shadow reared her ugly head.  I wasn't prepared for what I saw, with people tearing each other out of cars, beating each other, flames erupting through the streets.  History felt alive as it had never felt in my life.  I had always seen civil disruptions as things that happened somewhere else – in Prague 1989, in Chicago in 1968, not on my campus, not in 1992.  But the world was changing.  People were acting up.  Darby might have been gone, but another cohort were hitting the streets.  It all felt alive. Something was changing in the world and in me. 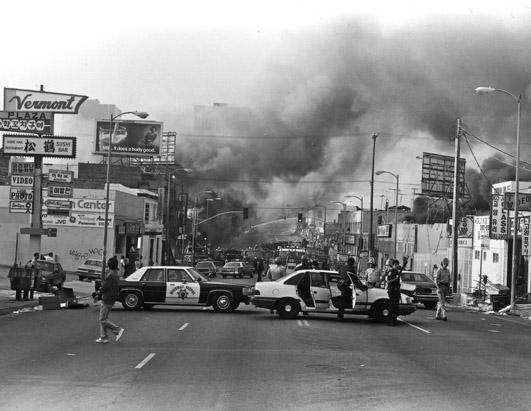 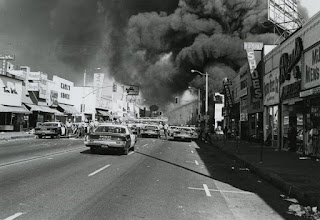 Posted by Benjamin Shepard at 3:25 AM