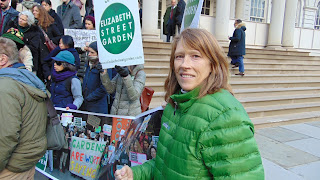 "I think it’s safe to say…Our Community Has Spoken!

It is December, the holidays are upon us.  We have shopping to do, and lights to string, and many many things going on, and it is freezing, but WE ARE HERE.  We are here, on these steps today because Elizabeth Street Garden matters.  Because our community matters.

My name is Emily Hellstrom and I am a long time Soho resident, mother of three growing kids, and a member of Friends of Elizabeth Street Garden.  You have heard the numbers and statistics, the figures and open space ratios, but what you need to know is that those numbers are actually people...these people.  Let me hear you!

These are the people who have labored countless hours, volunteered their precious time, and worked tirelessly to transform this space into something more than just a garden, more even than an outdoor community center...they have turned Elizabeth Street Garden into the soul of our neighborhood.

And it is for shame, for shame on our city to take these people, this vibrating, dynamic community and twist it to make us look like bad citizens. We are in the middle of a crisis, but it is not just one. We don’t have the luxury of having one crisis at a time.  We have an affordability crisis, AND an environmental crisis.  And how dare we say one is more important than the other.

The garden they are proposing is a sham!  Another concrete slab with benches.   We found a real alternative.  A gravel strewn lot, that can build 5 TIMES as much housing.  WHY ARE WE BEING CAST AS THE VILLAIN, when we have two incredible locations: one will build amazing housing for seniors, and the other will remain as a green oasis and thriving outdoor community center for us all!  We are the greatest city in the world, we have the leaders and the innovators and the doers all right here. We are tasked with solving BOTH problems.  And we WILL solve both.

So we thank all our elected officials and our supporters for coming out here today, and we thank the thousands of people who could not be here, but who have written letters and called, and rallied, and and volunteered and who continue to fight for Elizabeth Street Garden, and we say to you all:  We will not give up the fight, We will not be ignored, we will not be set aside, and we will not go away!!!! 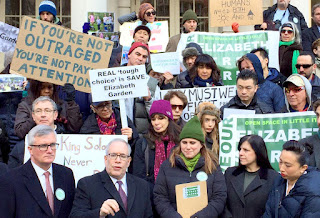 What's happening here isn’t just outrageous. It’s a question of who we are as a city, where we're going, and whether we believe in the character of our communities. This is a false choice — because once we pave over the things that make our neighborhoods special, they’re gone forever.Let there be no doubt that we need affordable housing that’s actually affordable. It's truly a crisis. But it doesn't mean solutions should come at the expense of green space — and it certainly shouldn’t come at the expense of the character of our communities. That’s why this fight isn’t over. We have to protect this garden. It's the right thing to do. —NYC Comptroller Scott M. Stringer 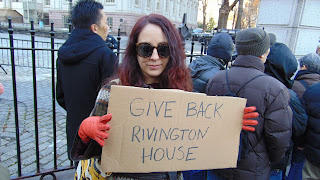 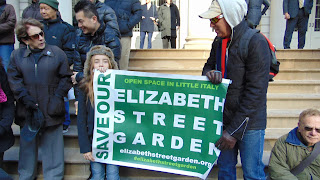 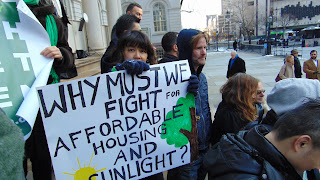 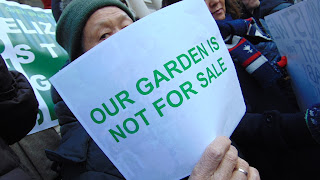 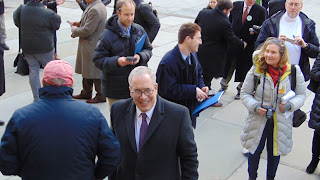 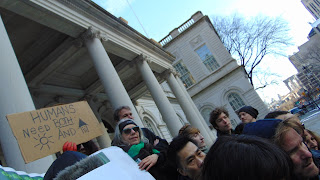 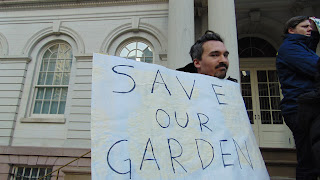 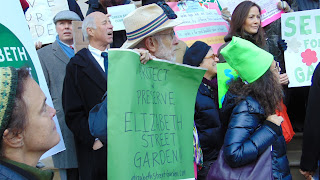 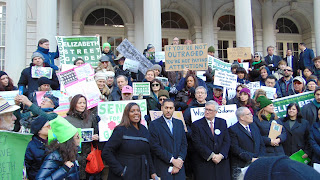 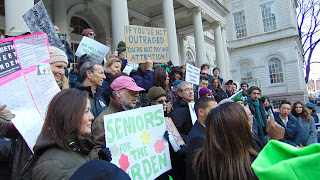 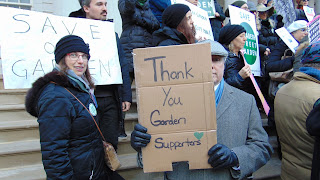 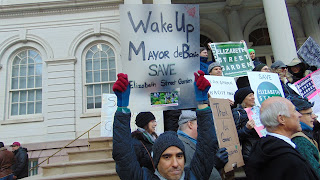 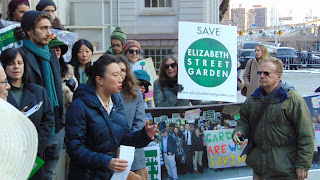 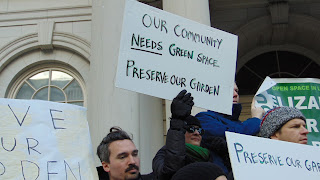 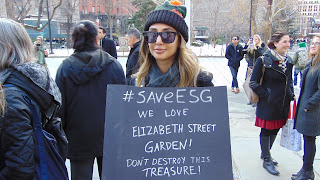 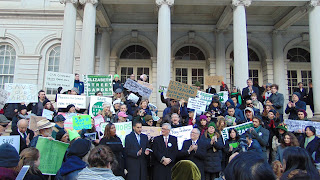 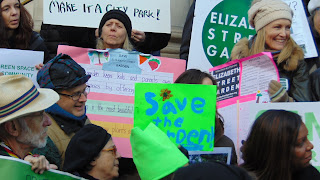 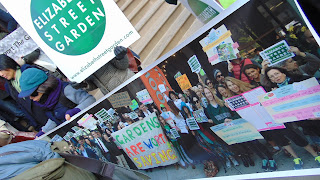 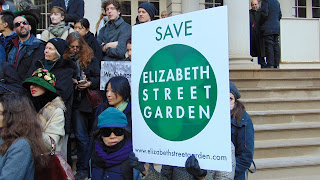 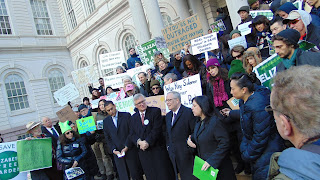 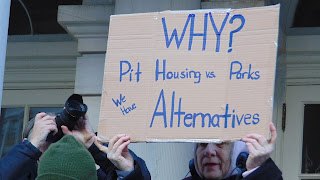 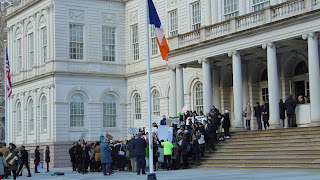 "On Friday, the city announced that Pennrose Properties, Habitat NYC and the Brooklyn-based non-profit RiseBoro had been tapped to develop the city-owned site. There will be 121 apartments and 7600 square feet of open space. While City Council member Margaret Chin is an enthusiastic backer of the proposal, while local activists in Little Italy and the Village, as well as most other elected officials, oppose the plan.
Friends of Elizabeth Street Garden will be holding a rally today at 1 p.m. at City Hall.
Then, tomorrow at 2 p.m., Council member Chin and affordable housing advocates, will stage a rally of their own at City Hall.
The proposal must be approved by the City Council through the ULURP process, but the Council normally defers to local Council members. Since Chin is a strong supporter of the development plan, approval is likely. On the other hand, there’s a powerful coalition that has come together to fight the proposal, so anything is possible." 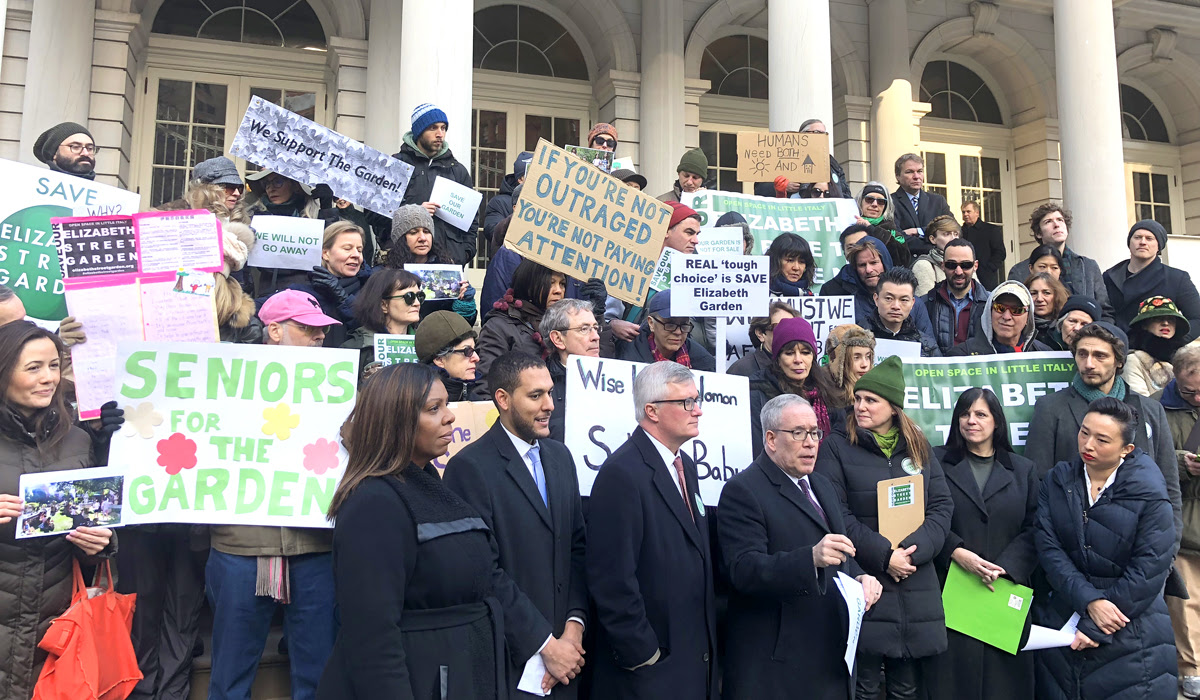 Thank you to our elected officials and well over 100 Garden supporters who braved the cold and heightened security, gathering on the steps of City Hall on Monday to demand that Elizabeth Street Garden be saved.  Our community is committed to this beloved green space, "the soul of our neighborhood." A bigger and better alternative exists for much needed affordable senior housing at 388 Hudson St., which can offer up to five times as many units.Thanks to your dedication and support we will continue to fight!
Posted by Benjamin Shepard at 7:56 AM