Janus, a Knock on the Door and Other Nightmares in Trumps America #scotus Janus ruling 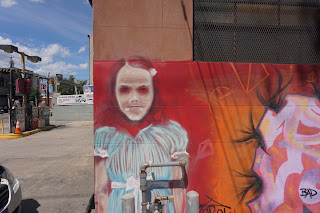 An apparition looms, lurking through the streets, in mind, in my dreams.
Its dark and hard to grasp.
Its comes for friends:
The immigrants, the queers, the Jews, the anarchists, the migrants, the trade unionists, the black kids.
Finally, as Martin Niemöller  prophesied, it knocks on my door.
Its taking me away.
Wake up! Wake up! Your screaming. Wake up.
I awake. Dream is over. But nightmare continues.
The apparition is still out there.
Its changing the planet, redeveloping cities, bulldozing gardens, privatizing public spaces, tilting courts, robbing rivers of water, pushing bodies out, into far away lands, eluding violence at home to come to our borders, running from climate change, where some are captured, put in the freezers, where Roxana perished. Others are separated from their kids, where they are criminalized, their fed into a pipeline to private prisons.
If prison is our new slave system, then foster care is the auction block.
Today migrant kids are being send there.
We have to widen our vision, noted Rev Billy and Savitri D on their radio show the other day, talking about the privatization of public space.
Yesterday, the courts ruled we can discriminate and bar religious groups.
I thought free expression of religion was a guaranteed right.
Thats what it says in the First Amendment, doesn't it?
Today, they came for unions, working to mitigate inequality.
There is still beauty out there.
People in the streets, rising and resisting, taking in a day at the beach.
But the apparition is looming.
“Capital is dead labor which, vampire like, lives only by sucking living labor, and lives the more and labor it sucks,” wrote Marx in Capital.
The vampire is looming.
It just ruled.

Statement on the U.S. Supreme Court’s Rulingin Janus V AFSCME
President Barbara Bowen, ProfessionalStaff Congress (PSC/CUNY), AFT #2334
The Janus decision is not about the FirstAmendment.  It is about consolidating wealth, power and even healthin the hands of the few while imposing permanent economic austerity on everyoneelse.  The majority decision helps toadvance an agenda that has been planned and lavishly funded by billionaires andfar-right organizations.  Its goal is toundo every gain made by workers, people of color, immigrants, women, the middleclass and the poor during the last half-century.
As historians havereminded us, “right-to-work” laws have their origin in an effort to maintainJim Crow labor relations in the segregated South.
The organizations thatgroomed and bankrolled Mark Janus sought to “defund and defang” unions, as oneof their documents put it, because they understand that the power of unionsgoes far beyond the improvements unions make for our own members.  Virtually every workplace standard in thiscountry is the result of union organizing and union victories: the eight-hourday, workplace safety regulations, the minimum wage, the weekend.  It is exactly that power that pro-Janusorganizations want to destroy.  Theytargeted public-sector unions because of our strength and the success we havehad in defending the public services that are essential to the survival of thosewho are not rich: public schools, hospitals, parks and transportation.
But Mark Janus and hisbackers miscalculated.  They failed toforesee that their attack on workers’ ability to organize would inspire unionsto become stronger.  Unions arose withoutthe support of the law and will survive the Janusdecision.  Buoyed by two years oforganizing in preparation for the decision, the PSC has its largest-evermembership and is continuing to grow.  Wewill be out in the streets tonight doing what unions do best: taking collectiveaction.  And we have redoubled ourcommitment to resisting austerity for our public university and organizing forthe contract we deserve.
The Professional Staff Congress (PSC/CUNY),affiliated with NYSUT, the American Federation of Teachers and the AFL-CIO,represents more than 30,000 full-time and adjunct faculty and professionalstaff at the City University of New York (CUNY).

Posted by Benjamin Shepard at 9:13 AM