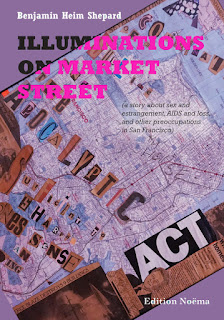 Illuminations on Market Street  is a heartbreaking, bitterly funny, and revelatory look back at a time of crisis in San Francisco, at the height of the AIDS crisis. This roman à clef proves the personal is political. It was written with great insight and punishing honesty by veteran social justice and queer activist Benjamin Heim Shepard. Shepard mined the contents of a personal journal from 30 years ago to create a slightly fictionalized saga of a city under siege and the souls in freefall who populated it.

It is 1992, San Francisco. Cab Callaway Hardy is a recent college graduate, budding street activist, journalist, horndog romantic, and restless idealist. He is living in the Haight and working the graveyard shift at an AIDS residence at 1994 Market Street. Death has a stranglehold on the place; people pass away every week during this height of the epidemic, before the arrival of the lifesaving AIDS cocktail. Cab tries to make sense of it all, between punk shows, protests, and difficult relationships with a number of women amid the changing rules of 1990s sexual politics. Slamdancing through it all, Cab reflects back on a troubled childhood amid the picture-perfect family, confronting memories and reckoning with deep losses along the way.

A number of book tour events are planned for Illuminations on Market Street, beginning with a March 24 release party in New York City.

The first chapter is
Walking the Toaster

“One cannot go to war and come back normal,”  -Richard Proulx, infantryman, US Army, WWII
July 1996

I had not been in San Francisco for over a year. But the city felt different than my previous time there. Walking up Market Street, I could not place it. Hyde and Leavenworth still felt down and out, a few homeless people wandering about, the smell of pot in the air, graffiti on the walls. I hurried past Van Ness, where I had worked. Debris was still strewn about, but it felt strange. I didn’t want to go back to the building, did not want to be seen or see anyone. I hurried past. I walked past an old café where I used to write, past Guerrero and Church where my friends and I drank and played pool after evening shifts at 1994 Market Street, the AIDS housing program where I’d spent those post-college years when AIDS deaths spiked and treatment eluded science. There was the Safeway where we met before leaving for the ACT UP action in Sacramento, throwing the ashes of our friends into the air and onto the steps of the Capitol so the whole world could see what we were living every day.  That felt like a long time ago, but I could still feel the ashes in my hands. Taste them. The city felt like something else was happening. There was Eros, a sex club I’d explored. Richard, one of the clients who’d lived at 1994 Market, was standing outside smoking. But he appeared odd. He looked like he’d gained weight. When I last saw him, wasting syndrome was pulling at him, seemingly squeezing the life from his body, like he was living in Auschwitz. I walked past Café Du Nord, where I had gone dancing so many times with Julie, glancing at the Baghdad Café between Sanchez Street & Noe Street, where we all met for morning coffee. A few people were walking out of Café Flore looking giddy. They strolled my way. One of them was Michelle, a transwoman who’d lived in the building. I looked at her and then away, ducking my head. Instead of the gaunt look of skin drawn into her jaw as she’d had the year prior, she seemed to have flesh on her body. She looked alive. Everyone looked alive. A line of people were getting ready to walk into Josie’s Juice Joint at 16th. They were laughing. It looked like the whole city was laughing, all of Castro Street. No wheelchairs like last time, no more walking dead. I guess the treatment—highly active antiretroviral therapy for HIV—that everyone was talking about was working. People were surviving. But things still felt peculiar.  A skinny young man wearing baggy jeans, a denim jacket, and a baseball cap walked by. Recognizing him, I started to say, “Hi Toby.” When I looked again it was someone else. It was a memory. He was gone. Toby had died two years prior.  The ghosts were still walking down Castro Street.  I was supposed to meet Jim, a coworker from 1994 Market later that night. Walking past the Van Ness again, I recalled my first day at work there, years prior. I was finishing the graveyard shift. The sun was just rising along Market Street when the phone rang.
“Cab?”  “Yes,” I answered. “It’s Terri.” “Morning, Terri.” “Can you come upstairs? I need to show you something.” I hung up the phone, called my supervisor Jim, who lived in the building, and walked up to the second floor. The hall smelled like rotting donated food, like decaying bodies. The place smelled like death. The building always seemed ominous, but perhaps less so in the morning. A new start. Terri’s door was open, but I knocked.  Standing with his hands on his hips, Terri was wearing a blue terrycloth robe and pink slippers. He turned around and smiled. His eyes were drawn into his face, his gums bleeding. But he didn’t seem to care. “Frankie is so demanding,” Terri declared in an exasperated tone.  “Huh? Frankie?” I asked, looking around the room.  “She wants to go again.” “She?” “She—Frankie—I’m so sorry I didn’t introduce you. That’s why I called you.” Jim, my supervisor, walked by and stuck his head in the door.  “Frankie wants to go again,” Terri smiled, gesturing to the toaster she was pulling down the hall.  “You just went, baby,” Terri was scolding the toaster, as if she was a puppy. Jim looked at me, trying to be serious, and then cracked a smile.  “Great to meet you, Frankie,” said Jim. “You need anything else, Terri?”  “No, I just wanted to introduce you guys. I found her here yesterday. She needs someone and now we have each other. But she has to go so I’m taking her out for a walk,” she explained, grasping the chord like a leash, the toaster dangling behind her.  “Good to meet you, Frankie,” I said. Jim and I walked down the hall. Terri was pulling the toaster talking to it. “Dementia,” Jim sighed. “It’s a big part of this and no one wants to talk about it. Before people lose their bodies, their minds go. Everyone is losing their minds. Everyone.” “Me included,” I said.  “You can’t lose your mind. You work here,” Jim responded. “You have to stay sane. And you don’t have AIDS.” Terri walked the toaster outside. The sun was shining on Market Street.  “What’s going on?” asked Pedro, another of the residents.  “That’s Frankie,” I responded, realizing I sounded as tired as I felt.  “Everyone is going bananas around here,” he grumbled to himself and walked outside. That was all but two years prior. Since then, it felt like everything had changed.  Later that night, Jim and I talked about it at the Motherlode, off of Polk Street.  “It’s not over, but the treatment has changed everything. People are living now,” he explained.

“It really works?” “The pills work.”  “I saw it today on Castro Street. People are alive again.” “But the side effects can be rough: Weight gain, weakness, nausea, diarrhea. Still, people are surviving now, those who get the meds and take them. That means insurance. But there are half the obits in the Bay Area Reporter. You remember it used to be pages and pages of obits? Now it’s just five or ten, not fifty.” “So we survived it?” I asked. “No, my roommate has it. And his life is not beer and pretzels. It’s not over for everyone. But it’s different now. People have a chance to live.” Walking home that night I thought about this strange moment. It had all changed since the bad days, when the Sword of Damocles hung over everyone, afraid a cough would lead to a bed, which led to an ambulance, which led to a hospital with a No Exit sign. Terri was long gone. He hadn’t survived it. Most of the residents at 1994 did not make it. But a few remained. Those who lived long enough for treatment were getting better. Thank god for treatment. There’d be no more walking the toaster.  That all seemed like a long time ago—the toaster, Terri, getting to know the city, trying to forget Chloe and know Julie. It was hard to imagine any of us would look at the world with the same eyes after that. I wouldn’t. A lot happened in those San Francisco years, between the plague, my friends coming and then shuffling off, and the stories reminding me of another world when I lived on Page Street. I had only moved there four short years prior. But that was enough for everything to change. 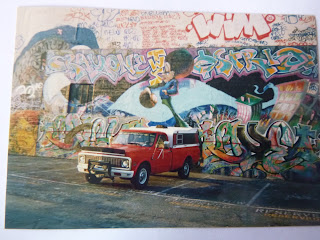 A car parked on Market Street 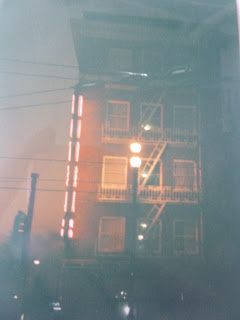 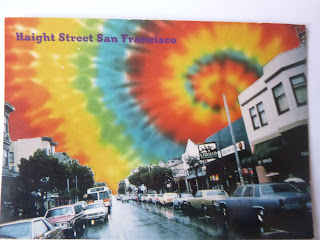 A postcard from part one! 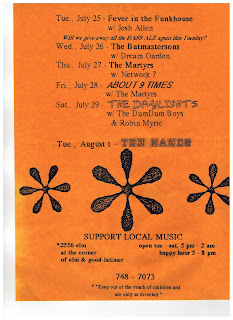 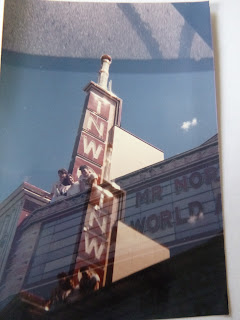 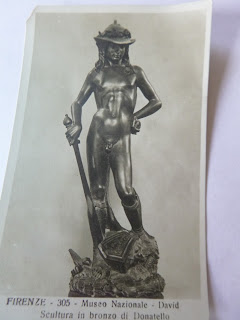 An image of David by Donatello from part three. 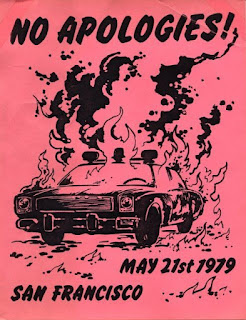 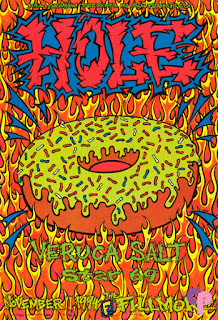 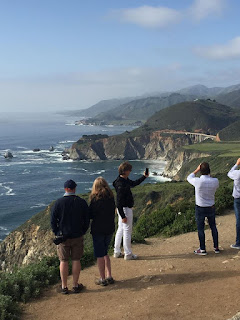 Riots and landscapes from part four. 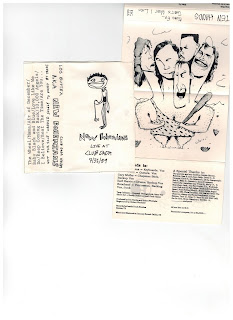 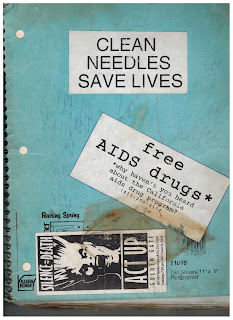 Some of the stories found their way into a blue notebook! 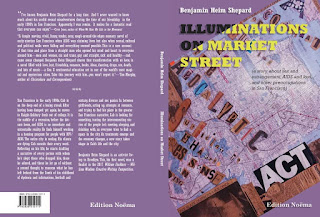 Posted by Benjamin Shepard at 7:35 AM