“That ball, it keeps bouncing” Charlie laments when  he can’t  get appropriations for schools and education programs which might have prevented the vacuum that left a space for the Taliban to take root in Afghanistan.

Dad and  Mom loved  travelling  in Afghanistan, he reminded me every time we watched that movie.

The two sitting together as the Soviet Tanks rolled out.

Our days in Dallas together, when Charlie Wilson was making his deals.

And Texans navigated the terrain with a laugh.

Joanne Herring: Why is Congress saying one thing and doing nothing?
Charlie Wilson: Well, it's tradition mostly.

And none of us were sure where life was taking us.

“There’s a little boy on his 14th birthday he gets a horse… and everybody in the village says, “how wonderful.  The boy got a horse” And the Zen master says, “we’ll see.”  Two years later, the boys falls off the horse, breaks his leg, and everyone in  the village says, “How terrible.”  And  the Zen master says, “We’ll see.”  Then, a war breaks out all the young men  have to go off and  fight… except the boy can’t cause his legs all messed up.  Everybody says “How wonderful.”

“The ball, it keeps on bouncing.”

Over the years, Dad and I acclimated  to our lives in Texas together,
Mom, John and Will coming and going.
But he was never quite of this world, navigating between expectations of what his life would become and  the life which  unfolded around him.

The little one and I have been reading his grandmother’s memoir, which includes her proud reference to Dad getting accepted into the Freshman class at Harvard in 1956.

The expectations were  too much.

Dad went for a year or two,
Ran away to San Francisco to follow the beats and search for meaning in this existence.

Eventually returning home,
Back East
Where he flunked out of Harvard again,
Following his  father’s example,
Into  the military,
Where he hoped for glory.
What he found was a complicated terrain,
The vexing contradictions of his life became more and  more pronounced.

"Same old reasons to start a journal," he wrote in 1961.
"Need for self awareness and introspection.  Need to place down and sort my thoughts.
Letters to be written,
Books to be read, projects to be completed..."
Dad lists Dostoyevski and Freud.
"Need to study Freud."

We listened to Pete  Seeger records from his Beat days.
And Dad saw a different kind of patriotism.

“One of the things I'm most proud of about my country is the fact that we did lick McCarthyism back in the fifties,”
Pete  reminded  us.
That flag is for all of us.

With that feeling,
he embraced his journey through the military, around the world,
And back to Texas,
Where late at  night, he watched movies or read.

His favorite, Patton.
"Americans have never lost and will never lose a war," Patton ranted.
Ask a Southerner if they feel like we never lost a war Shelby
Foote wondered in the Civil War.
Dad used to sit drinking watching the movie by himself.
I knew not to disturb him when he was watching.

“God, how I hate the 20th century,”  George C Scott ranted
as Patton.
This was  not always his world or his time.

Before  he left,
He told me about running in  Troy,
the Bronz Age City from the Trojan War,
that Homer mythologized in the  Iliad.
I imagine that space was more amenable to his fantastical sensibilities than this modern world.

On our best nights, we shared our stories.
Cooking chicken outside on Sundays.

Dad played me Dylan records.
Sad Eyed Lady of the Lowlands from Blond on Blond:
“And your streetcar visions which you place on the grass,
And your flesh like silk, and your face like glass,
Who could they get to carry you?”

I played him Lola.

He pulled old Leonard Cohen records,
Exploring a theology of poetry,
Beat sensibilities and closing horizons.
Trying to make sense of it all,
As he lived and wrote,
Reading the Upanishads until his last days.
His body waning,
His heart expanding.

“The little space within the heart is as great as the vast universe.
The heavens and the earth are there, and the sun and the moon and the stars. Fire and lightening and winds are there, and all that now is and all that is not.”
― Swami Prabhavananda, The Upanishads: Breath from the Eternal

I think of Dad all the time.
Certainly, he was but he was not as I read this weekend,
On the hundredth birthday of Lawrence Ferlinghetti,
The fifth anniversary of his departure,
His memories still lingering,
In the Illuminations on Market Street,
The streets you walked four decades before I got there.
When we traversed them together.
Visiting the novel’s protagonist Cab.

“Reading Beat poetry, driving up and down the Pacific Coast Highway One, staying in cheap hotels, watching waves crash on the cliffs, and walking through the city streets of San Francisco, we talked and talked and life took a new cycle.  As soon as he came, he was gone.
But the past was hard to shake.”

It was odd not having you here,
Dad there.
But it was also ok.
Or maybe he was there?
It always feels like he’s around.
Even five years since you’ve been gone.
Last year, we went to El Quixote where we used to  eat together on all those trips to town.
The old haunt closed the next night.
But the memories still linger, with the old pictures,
Songs, Memphis Blues,
Where we fought the law and the law won.
Drinking champagne that tasted just like cherry cola.
And my mind trailed back to the old journals,
That I  can’t  read on  the shelf.
The walks in Princeton,
Shooting guns on the farm.
Remembering what it was all about,
As the time from childhood, you and me against the world,
passed into something else.
Mostly memories I recall
The movies we watched.
Our first trip together some time in 1975 when
Rod left too early.
Leaving me to wonder why he left us behind.
A 1975 feeling I would never shake.
And dad took me to the movies.
Michael  and Sean in The Man Who Would be King.
Where Rudyard Kipling warned of our folly.
“The wheel of the world swings through the same phases again and again. Summer passed and winter thereafter, and came and passed again.”


Another March,  another year gone. 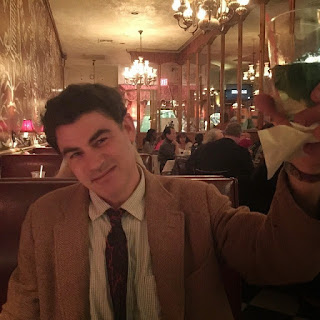