"HOUSING, NOT HANDCUFFS!": RALLY TO OPPOSE CRIMINALIZATION OF HOMELESSNESS 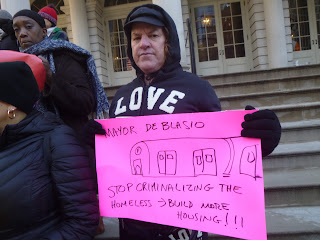 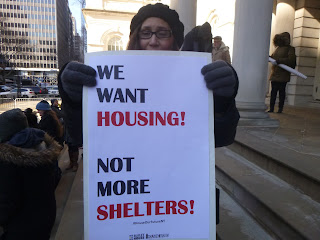 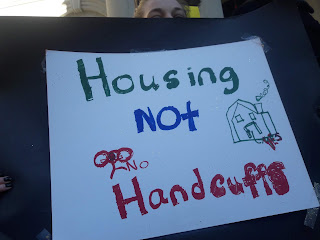 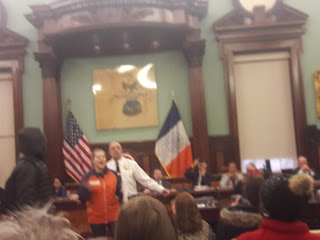 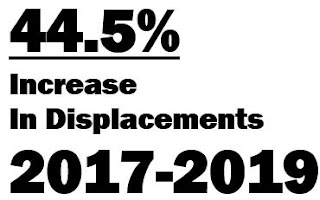 Safety Net Project@SafetyNetUJC:
"Data we recently received through a Freedom of Information request shows that @NYCMayor De Blasio's administration has significantly increased reliance on displacements of homeless people on the street over the past three years."

Safety Net Project@SafetyNetUJC:
"With no corresponding increase in street homelessness, the De Blasio administration increased its displacements ("sweeps" or "clean-ups") of those on the street between 2017 and 2019 by nearly 45%." 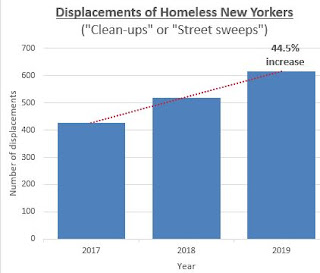 This  weekend, I  got  an invitation  to a  hearing today at City Hall.
“Please join homeless New Yorkers and other advocates to oppose the increasing criminalization of homelessness! We will rally in advance of a Council hearing on the NYPD's so-called "Subway Diversion Program," a misguided initiative that aims to coerce homeless people into services with the threat of summonses.  Homeless New Yorkers need permanent housing and low-threshold safe haven shelters, NOT more interactions with police officers!”

On Tuesday at 1pm, City Council held an oversight hearing on the mayor's "subway diversion" program. The program involves police clearing trains of ostensibly homeless folks, primarily in Manhattan, then giving them a summons and telling them they can go to BRC to see a shelter intake worker and have the summons dismissed, or not go to BRC and have to follow through on the summons.

“We need housing not tickets,” read one of the signs at a rally outside City Hall before the hearing started.

UJC Safety Net Project and the UJC-affiliated Safety Net Activists as well Housing Works and other homeless advocates participated in the rally.

Diversion program is an Orwellian lie.  Its about making people feel comfortable on the subway, not addressing the crisis of homelessness. That starts with housing, jobs”
and related services, including mental health counselling, and vocational training.
It does not mean  putting  people to the side,  at  the margins.

The De Blasio administration has increased its street sweeps of homeless folks by 44.5%, while there’s been no corresponding increase in folks living on the street according to the city’s own data.

At the hearing, Councilman Steve Levin talked about homeless people being targeted for outspreading, or manspreading.
It is  a way of criminalizing the homeless.
But this is not going to stop the crisis, he insisted.
What  gives me pause is that the police are profiling people who look homeless, noted Councilman Richards, the chair of the general welfare committee.
This is coercion, not diversion.
And most certainly, it is not a solution.
The NYPD is not the best group to be doing outreach to the homeless.

This is a coercive program  to get the homeless out of public space, noted Steve Levin.
A better solution would be to open the thousand beds that the city has promised for the homeless.
Levin read an  anonymous letter from members of the NYPD about the program posted  on the website https://www.diversioniscoercion.nyc/:

The following letter was sent anonymously to Human.nyc & Coalition for the Homeless in November, 2019.
It has been pasted below unedited and in its entirety. The source was verified by Human.nyc. To whom it may concern,
As dedicated officers assigned to the NYPD Transit Bureau, we are writing on what we feel is a matter of utmost importance; the blatant discrimination against the homeless in the NYC subway.  The Diversion Program that is being advertised by the Mayor as helping the homeless can be nothing further from the truth.  He has found a willing partner in the leadership of the NYPD, who have a history of only understanding numbers and intimidating its officers, to complete the task.  With the creators and believers of the program claiming success, the program is now being rapidly expanded into a version we fear is the worst yet. The homeless are now clearly being targeted as violators of transit rules and being treated differently than any other citizen.  Using the technicality of not having identification or an address, the NYPD is using this as an excuse to have a legal interaction with homeless individuals.  This is a drastic change compared to how we have treated the homeless in the past.  What the public isn't being told is that homeless people are now being handcuffed, put over the radio as an arrest, and then brought into our transit commands.  There, the homeless individuals are being coerced into services that could have been provided without having to handcuff and bring them in.  They are being threatened to accept services and told that if they refuse, they will get a ticket, which most can't afford to pay, or go to jail for a violation that the Manhattan DA has already made clear will be refused for prosecution anyway.  It isn't about helping them. The most common violation, called outstretched, it the same violation committed by anyone who even lays their bag on another seat.  This is something we all have done ourselves and witness everyday.  Those situations are not addressed in the same manner.  Can you imagine if we arrested someone in a business suit, on their commute home, with their briefcase on the seat next to them and happened to have forgotten their ID that day?  Or if it was a 16 year old sitting in the stairway waiting for their train so they can get to school?  There would be an uproar.  We don't bother those people because, as officers, we use discretion.  The reason why the same is not true with the homeless is that the leadership has chosen to take that decision away from us.  NYPD brass are using the Diversion Program as a new quota, implemented through the use of the usual fear-driven tactics to motivate its Officers to complete the task.  We are constantly being threatened and told by our immediate supervisors to get diversions.  We are being boldly told how many to bring in a day.  In addition, we now have forced overtime, disguised as quality of life operations. They are being team led by a supervisor to make sure we are arresting the homeless, rather than offering them services in the field.  Majority of these arrests are being assigned.  Why can't a police officer treat the homeless the same as an outreach team?  Why are they now being treated differently?  There is a clear double standard at play against the homeless. The CCTV for the Diversion Program that is claiming to be used for "rapid deployment of outreach to address client needs" is really being used to call our commands directly to dispatch us.  We are then being specifically told by the command to bring that person in as a diversion arrest.  In addition, most of the overtime is done in plainclothes to both try to please officers so they can excuse the action in their minds, and to have the ability to blend into the crowd so we can sneakily grab the homeless without attracting as much attention from the public.  There are even some commands that have pictures of homeless individuals they are keeping tabs on right next to pictures of wanted criminals, blurring the lines of what qualifies as a "bad guy" for the NYPD.  This shift is dangerous, especially for new officers that don't remember a time before this.  The Diversion Program has become an obsession.  We have lost focus on overall crime and especially counter-terrorism, leaving citizens more vulnerable.  Instead, we are unjustly criminalizing individuals who have done nothing worse than the average person in the subway all because they have no home.  It isn't helping anyone. Treating the homeless in this manner is changing the morality of what it means to be a police officer, sworn to protect all citizens, especially the most vulnerable.  Many of us are conflicted on what we are being told to do, but we are forced to follow orders, or face disciplinary action. This message is being sent anonymously, as we fear repercussions from our job.  Please let us know this message was received and brought to the right people, as this window of communication can't stay open for long.  Ask the dedicated members of this department if they feel what they are doing is right.  Ask the public.  We are asking you to help us challenge their word on this program for all to see.  Let us know that we have solidarity.
- Yours Faithfully”

After Levin’s testimony, a group of advocates put on a skit about the problem,
highlighting the ways the diversion moves to penalize the homeless, instead of solving the problem or connecting them with housing.

“Stop the Abuse, End Homelessness!” they screamed.
Hopefully the council and mayor’s office are listening. 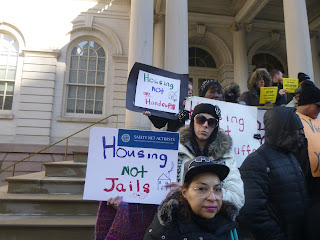 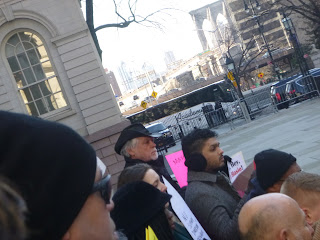 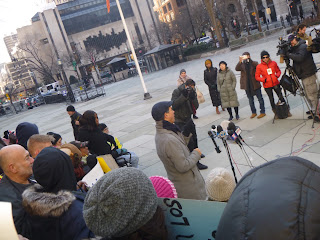 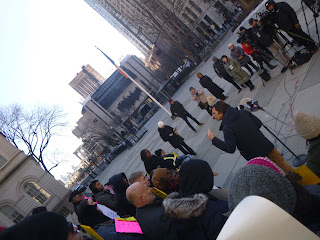 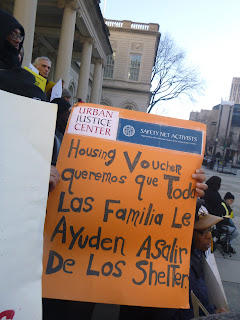 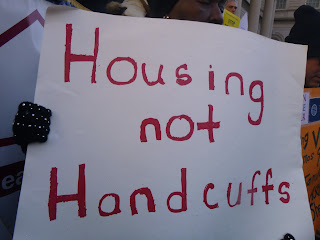 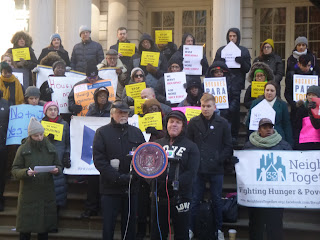 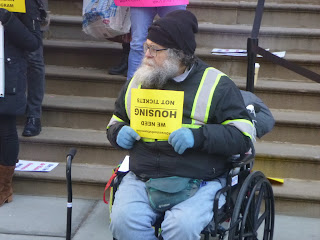 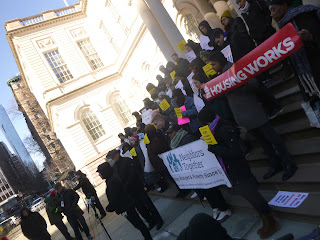 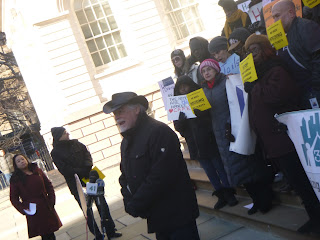 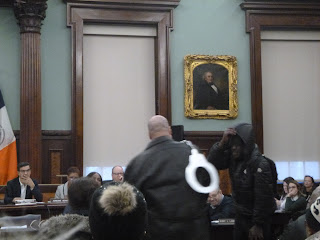 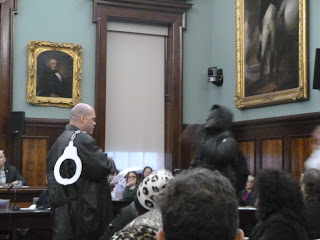 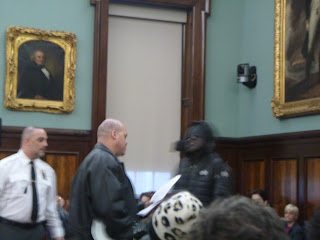 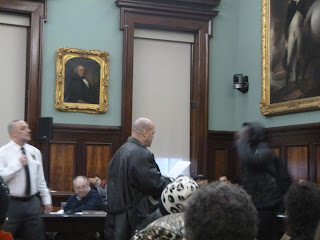 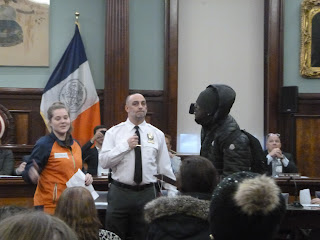 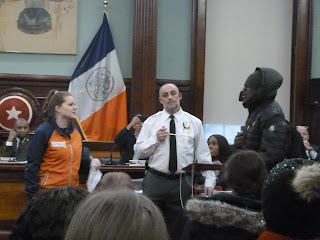 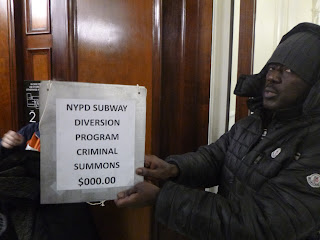 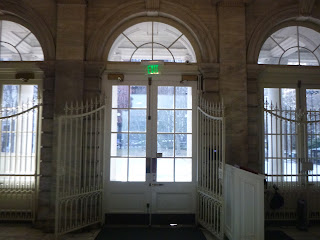 Posted by Benjamin Shepard at 1:27 PM