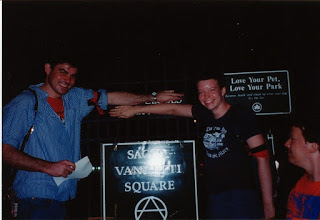 I remember the first time I met David Graeber, the luminary anarchist anthropologist.. I'd been seeing articles about the World Economic Forum and a "Yale Anthropologist" commenting about it. In between meetings at our convergence space, I asked what he was studying now. "You," he replied. "You," he told me he was studying all the New York anarchists. He was trying to make sense of us, of our milieu, the community gardeners, war resisters, writers, squatters, dumpster divers, and direct action people filling meeting spaces, reclaiming streets, flying to Seattle, the clown blocs and militants.  We talked about Chicago, where we both studied in the mid 1990's, and organizing and social movements and social theory.  His mind dipped and zigged an zagged, with associations popping from here to there. At meetings, he'd type notes with a fury. Those meeting minutes were also his ethnographic field notes. He turned social movement ethnography into a work of art.  Each book pointed to larger questions about what we were doing. When I told him I was thinking about festive revolutions, he said I should study Huizinga's Homo Ludens, as we walked in between meetings during the RNC. And fireworks went off in my head. I started interviewing everyone I knew about how they played and how play fit into our social movements. He complimented my work and encouraged it when others thought it was nuts. Five books later, I'm still thinking about that question. I tried to talk with him for my dissertation. He said he wasn't feeling playful. Yale had fired him. He put himself out there. And sometimes it took a toll. Looking back at that activism after 9/11, I think it took a toll on all of us.  Some retreated.  Not David, but it took its toll. We need to listen to symphonies said Howard Zinn. Politics can make us sour. I loved seeing him smile watching the movie, "Can Dialectics break bricks." Or talking Guy Dubord in our lower east side anarchist reading group. He incited reactions in people, in our communities, in those in power. He said anarchism is about democracy. And not everyone agreed. We all had ideas about the best approach. We all fought about things.  He moved from humble and curious to occasionally confrontational or condescending.  "Good try," he once said as I tried to calm a flame war on one of the listserves. And I got caught up in that probably too much. But he always took my calls and was willing to talk things out, even after lots of emails. And he'd apologize, a rare highly admirable quality. He saw this as a big social movement, connecting dots between movements far and wide.  He was able to bridge that space between the squat and the Charlie Rose show, saying the same things in each place, bringing those conversations to a large audience. The last time I saw him as we walked to Duarte Square during Occupy, chatting all the way. Earlier in the summer, he joined us on the Clearwater, during a Times UP ride. What a loss. When I think of him, I think of a time we fought about empire and war, gabbing for hours, prepping for the World Economic Forum.  We didn't always agree. But he was a thrilling public intellectual, one of a kind. The end of an era.  I’m gad he was there.And now he’s gone.

“I’m devastated by the death of David Graeber. To me he wasn’t just a mentor and comrade who taught me so much about being a politically engaged social scientist (which is more than enough in itself), he was also the friend that when I was depressed would drag me out to dinner and get me talking about it... the friend who when I was sick and new in London would pop around with soup and good cheer. Though we haven’t gotten to see each other much since I moved out of London and have been busy being a parent, I love him with all my heart. I simply don’t have the words that can fully describe knowing that he is suddenly and far too quickly no longer with us. RIP David...”

“I’ve been feeling the death of David Graeber since I learned of it yesterday. He was brilliant, generous, quirky, had a great passion for ideas and never forgot his working class roots.

David used to come around the NYC Indymedia office in the early 2000s and contributed occasional articles for the Indy. I would periodically see him at protests over the following years and he was always ready engage in a wide-ranging conversation though he would do most of the talking which was fine.

He was very much a product of the anarchist left of early 2000s with its intense skepticism of the state or almost any form of bureaucratic organization. His fervent belief in consensus (or near consensus) based decision reached in general assemblies would seem as strange and mystifying to today's young socialists as the Mayan hieroglyphs he studied as a teen-ager.

For whatever reason, I find myself thinking back to the night of September 11th. David, Brad Will and myself were at the Indymedia Center when we decided to ride our bikes

down to Lower Manhattan to get as close to the WTC site as we could in order to see what was going on. When we popped out of the narrow downtown streets on the side of the West Side Highway, there was a line of hundreds of ambulances from as far away as Rhode Island. They had come to help but there were no survivors to rescue. There was nothing to say and we pedaled away as quietly as we came.”

John's note and Graeber's death seemed to shake up some memories,

all that activism after 9/11 which was so heartbreaking.

This one hits close to home.