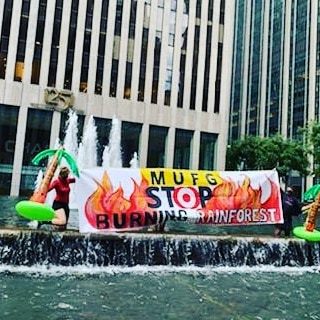 owen crowley
Today we dove into the privately owned public fountain in front of MUFG Bank's New York headquarters with inflatable trees on "fire" and an 18 foot banner that read "MUFG Stop Burning Rainforest", to expose their bankrolling of climate change.

In the past year, MUFG made good progress by adopting and strengthening its financing policies, but we’ve yet to see the impact on the ground. Through its lending to rogue palm oil and fossil fuel companies, MUFG continues to bankroll the growing climate crisis, furthering deforestation, species extinction, and human rights abuses.

CALL ON MUFG UNION BANK TO MAKE ITS POLICY MATTER!

MUFG recently adopted policies around financing forestry, palm oil, coal power, and coal mining operations, but received criticism from NGOs including RAN that its policies don’t go far enough to align with the Paris Climate Agreement or the Sustainable Development Goal of halting deforestation by 2020. Unlike its best-in-class peers, MUFG makes no mention of the leading agro-commodity standard of “No Deforestation, No Peatland, No Exploitation” (NDPE) nor commits to a Paris-compliant phase-out of fossil fuels. As of 2018, MUFG was the 6th largest global lender and underwriter of companies driving tropical deforestation in Southeast Asia and the 7th largest global lender and underwriter to all fossil fuels. In Japan, MUFG is the largest financier of the palm oil sector and the largest financier of fossil fuels, most notably coal power. MUFG’s recent commitment to restrict financing for coal power projects was cautiously welcomed by NGOs amid concerns with noticeable loopholes.

Security guards swirled around us as we made our way into the water of this privately owned public space, swatting our photographers as they took pictures.

Its a public space, I told them.

Tell that to the police, they said.

After the action, Monica posted the following note.

"It's been a minute since I jumped in this fountain. A great reason to do it today for a national week of actions against the Big Business of burning rainforests for profit!
TODAY: Local activists in NYC demanded accountability from Mitsubishi Union Financial Group (MUFG) to stop its financing of the climate catastrophe through funding fossil fuels and big agribusiness. #DefundClimateChange #Stopthefires!
The “cheapest” way to clear land for big agribusiness is bankrupting people & planet: Our world’s rainforests are being set on fire for profit. Join the fight to #StopTheFires and end the Big Business of Burning!
Photos by
Erik R. McGregor
: https://flic.kr/s/aHsmQv8Nk9
Video by
Owen Crowley
Spokesperson:
Patrick Houston
Banner Deployment team:
Lizzie Hurst
,
Benjamin Heim Shepard
and me.
Important and often overlooked role: bag watcher! - Gustavo
And i gotta add, this was one of my favorite banners to make.
Also I think Owen edited out most of the drama but the security guards were aggressive as heck and tried to take Erik's and Owen's cameras out of their hands. Thanks brave documentarians!!"
As usual, Erik McGregor took some lovely photos. 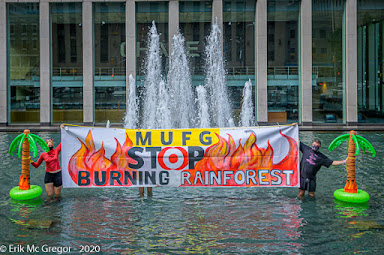 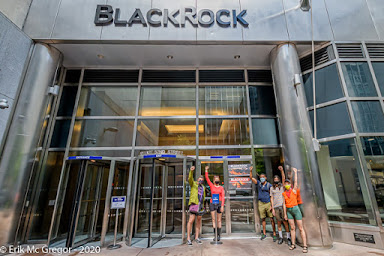 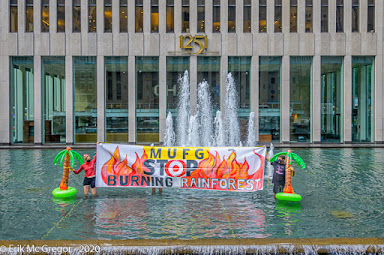 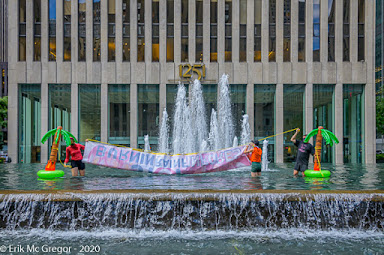 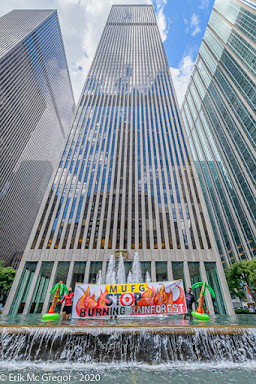 Posted by Benjamin Shepard at 1:20 PM