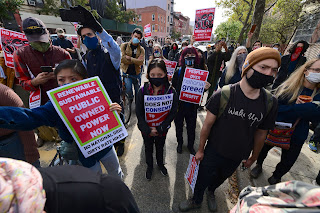 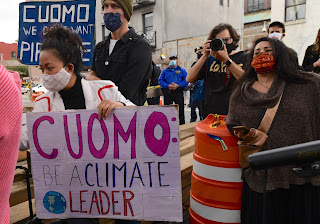 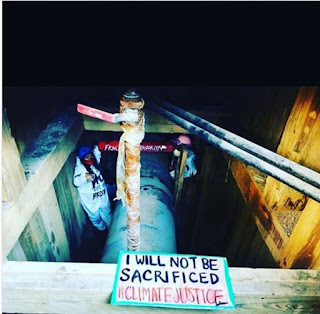 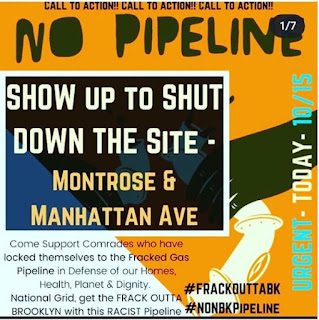 The North Brooklyn Pipeline is being built by corporate utility National Grid through predominantly Black, Brown and working class neighborhoods without community consent. National Grid is proposing to raise monthly bills for 1.85 million downstate customers to pay for the pipeline.
"The North Brooklyn Pipeline is a monumental step backwards and completely incompatible with our climate goals,” said New York City Comptroller Scott M. Stringer. “Tearing up neighborhoods, building a $185 million dollar pipeline, and forcing New Yorkers to pay for it is an affront to environmental justice and a slap in the face to the thousands of our neighbors who oppose this project. I stand with the community in fighting for the green future New Yorkers deserve."
Phases 1-4 of the pipeline are nearly complete and the company says they want fracked gas running through that portion in October. No construction was happening at the time of the rally, which organizers declared a small victory in a much larger fight to shut the pipeline down for good. Community members shut down construction on two consecutive days last week, and 7 people were arrested.
“The north Brooklyn communities of Bushwick and Brownsville have said no to this pipeline with their voices, letters, and bodies,” said community leader Sandy Nurse “National Grid’s fracked gas pipeline puts our neighborhoods in danger, and we refuse to sacrifice our safety for their profits. Fracked gas destroys the communities in states surrounding New York and puts us at risk because of the high pressure fracked gas in the pipes. The people of NYC chose real renewable energy solutions, not more projects that lock us further into fossil fuel use.”
The No North Brooklyn Pipeline Coalition is calling on Mayor Bill de Blasio and Governor Andrew Cuomo to use their powers to permanently halt construction and stop National Grid from raising monthly bills.
“Last year we passed landmark climate justice legislation. It is counterintuitive and absolutely wrong to commit to transitioning off of fossil fuels, and then for our corporate utilities to be expanding fracked gas infrastructure in our communities. And what’s even worse is they are doing it on the backs of working people,” said State Senator Julia Salazar. “So today we’re calling on Mayor de Blasio to revoke the permits and to Governor Cuomo do not grant the corporate utilities another rate hike. Our communities cannot afford it financially and we cannot afford it from a climate justice perspective either.”
“The Bushwick and Williamsburg Community are speaking up! We stand here at today’s rally to say that we heavily oppose National Grid’s North Brooklyn Gas Pipeline. This project is putting thousands of residents at risk of exposure to toxic chemicals that are not only detrimental to the environment but can cause health complications to individuals. New York State banned fracking several years ago because it is not safe, communities need clean energy.” said Assemblywoman Maritza Davila, New York State Assembly.
“I don’t think National Grid knows who we are here in North Brooklyn because we’ve been fighting for environmental justice our entire lives and we will stop this pipeline,” said Councilmember Antonio Reynoso. “National Grid doesn’t care about people. They don’t care about the environment. They only care about their bottom line.”
“We demand an immediate stop of this dangerous fracked gas pipeline being pushed through our neighborhoods without any community input, extorting the people of this community for profit of investors. This is a prime example of environmental racism: A pipeline forced through our Black and Brown communities in Brooklyn without any input and asking us to pay the $185 million it costs by increasing our gas utility rates,” said Samy Nemir Olivares, Community organizer and District Leader of Assembly District 53 representing the area in Williamsburg and Bushwick. “This is shameful, insulting and outrageous. The pipeline is a 30-inch, deadly ticking time bomb being pushed through an evacuation zone of over 153,000 people, 81 childcare facilities, 55 schools, and 1 hospital. This dangerous fossil fuel pipeline goes against what our communities are asking for clean renewable energy just to help National Grid continue to expand their fracked gas business, it would contribute to climate change, release radioactive material, or even worse cause a catastrophic explosion. More so, this project ends at a liquified natural gas tank that is also being expanded to load trucks with LNG. Transporting liquid natural gas in New York is illegal for a reason, in 1973, 49 workers died after an explosion in Staten Island. We don’t need nor want to repeat that history. They thought our communities wouldn’t notice or speak up, but we are standing up.”
Representatives for Maloney Carolyn B Congresswoman and Councilmember Stephen Levin also forcefully spoke out against the pipeline at the rally.
Our elected officials are here today to stand with the community, not the big corporate utility and say shut this dirty fracked gas pipeline down for good,” said Greenpoint resident Kevin LaCherra. “To Governor Cuomo to Mayor DeBlasio. We don’t want any more pipelines. We want renewable energy for our homes. We need public power. We are standing together. East New York, and Brownsville, Bushwick, Williamsburg, and Greenpoint. Every neighborhood in this city. Every community in this state. Join us. We’re gonna shut it down.”
###
For more, visit https://www.nonbkpipeline.org/
Posted by Benjamin Shepard at 10:15 AM