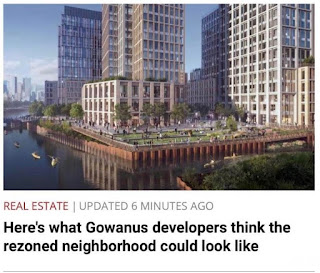 “It is not affordable. Now you’re building something on a contaminated canal. It’s not right.”

The proposed Gowanus Rezoning stumbled hard out of the gate as the first public body assessed its merits last week following the June 3rd joint community board hearing. The committee found the proposed rezoning plan deeply inadequate and unsafe. A vote of “NO” ensued.

On Wednesday, June 9th, Brooklyn Community Board 2’s Land Use Committee voted 6-4-0 against the Gowanus Rezone. The first community board vote on the de Blasio Administration’s massive Gowanus Rezoning resulted in a dressing down of the city’s proposal based upon the lack of real housing affordability in a plan rife with developer giveaways. It also centered on concern about longstanding health & safety issues as the City looks to put low-income New Yorkers on polluted, toxic land along a waterbody with major flooding problems.

In open debate, Committee Member Esther Blount gave voice to the community’s frustration, speaking out in opposition to the Gowanus Rezoning: “I feel like the people who need housing can’t get it but we keep talking about ‘affordable.’ ‘Affordable.’ It is not affordable. Now you’re building something on a contaminated canal. It’s not right.”

Denise Peterson, Vice-Chair of the Economic Development & Employment Committee, spoke about community opposition to the Gowanus Rezone, saying: “The conversation has to change because it seems like there’s always the wiggle… All those who come to the table to discuss “affordable” housing—and the word “affordable” has more interpretations than I ever heard in my life… It’s not fair… Something has to change. It’s to the benefit of the developer… The rich get richer.”

During the public meeting, Jonathan Keller of the Department of City Planning attempted to dismiss the health & safety concerns raised by committee members, falsely claiming: “Depending on the type of hazardous material, they shift in different ways… Coal tar will just keep sinking.”

Keller’s misleading comments run directly counter to the engineering-based assessments and professional expertise of Christos Tsiamis, the lead engineer for the Environmental Protection Agency who is overseeing the clean-up of the Gowanus Canal. Tsiamis stated at a public meeting in December 2020 that toxic vapors could rise and be trapped inside of the proposed buildings, posing significant health hazards to future low-income residents; he also said he would not live in those buildings himself.

Community Boards Should Vote No

Brooklyn Community Board 2’s Land Use Committee is to be applauded for engaging in real discussion and considering the broader and longer term implications of the city’s disastrous rezoning plan for Gowanus.

Voice of Gowanus encourages Community Boards 2 and 6 to vote NO on the Gowanus Rezone, and to trust the assessments of scientific experts. But don’t take our word for it: Congresswoman Nydia Velazquez has publicly called for the Draft Environmental Impact Statement (DEIS) for the Gowanus rezoning to be re-done with the full participation of federal agencies, as required by state and federal law.

Posted by Benjamin Shepard at 8:02 AM