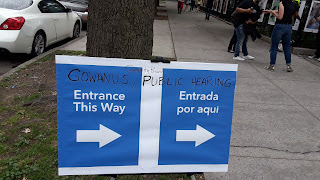 Signs for the super well advertised hearing for the biggest rezoning in decades. 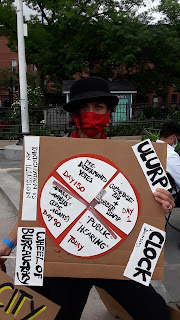 @norasays and the ULURP clock. There is something rotten in Denmark, well Brooklyn. 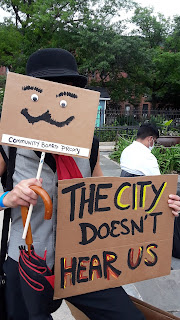 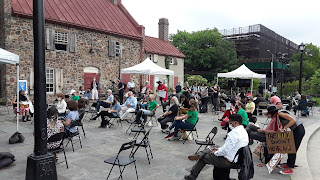 Democracy at its finest at the Gowanus rezone meeting held during the workday. Question is is anyone listening? #nogowanusrezone #nodevelopedgivaways 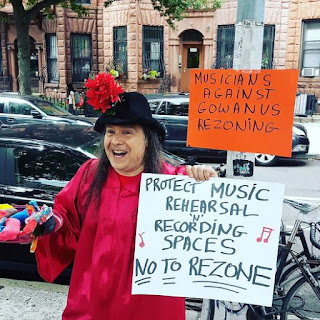 People voiced a range of opinions about the GowanusRezoning hearing on Thursday.

“I wanna support this but there is something rotten in Denmark,” said one observer, noting the commitment to NYCHA funding was inadequate.

Andrew called for 75% affordable housing, not 25%.

Others were concerned with displacement and homogenization.

“We need the funky mix,” said Martin, whose lived and owned a business here for more than four decades.

Of the 150 people to testify in person, some two thirds opposed the rezoning as a “hyper gentrification” giveaway.

martinbisibc stood outside the hearing with a band he brought.
“We tell @bkcb6 and @brad.lander that not all artists want a flood of trickle-down rich people to cash in…”

The audience for the hearing were two community boards.  But it was not clear anyone was listening.

“Which council people are see them,” wondered Nora.

“I didn’t hear about this until right now,” said my friend Jessica, standing outside.  “It wasn’t well advertised.”

All week, I tried to sign up to testify.  No one picked up the phone the first three times I called.  And when I did get through, the person answering did not know where the hearing was or when.

After waiting for three hours, I was allowed to speak for two minutes sharp at 6:30 PM.

I am writing to express my disapproval of this rezoning.

My testimony is based on my experience as someone who has lived, worked and brought up kids in the impacted areas for well over two decades. I have no ties to the real estate industry.

What I do have are environmental, aesthetic, and justice-based concerns over the rezoning.

As a social worker, I am concerned that the affordable housing is not being done right. It needs to be spread throughout the neighborhood, as opposed to placing thousands of people on toxic land at Public Place, a former manufactured gas plant site with coal tar plumes over 150 feet below the surface that will not be fully removed.

- The combined sewer overflow tanks will not be built before the rezoning development starts. This risks undoing the superfund cleanup remedy.

- The draft environmental impact statement is illegal. The rezoning must not go forward until it is redone with EPA and FEMA helping prepare the EIS as involved agencies as required by law.

- The process for this hearing is flawed.

- The judge has not yet issued a final ruling on our Voice of Gowanus lawsuit; this hearing format is not legal under the text of city law, not uniform or equal to what other neighborhoods were afforded, and the city is rushing this during a pandemic to exclude the community.

- The Gowanus rezoning would place thousands of people in FEMA Flood Zone A and permit land elevation changes that put residents of Gowanus Houses at increased flood risk.

- This is not a community-based plan. All the window-dressing by politicians and developers and the non-profits cannot hide the fact that this plan is being imposed on us. It is primarily about developer profits, not affordable housing, racial justice, or cleanup.

- Communities, not developers should direct their own development.  Yet, sadly this is just another developer giveaway.

- This is a Disney model of planning and cultural displacement.  They want to stamp out what is special here.

- Please vote no to this rezoning.

Before the hearing, Voice of the Gowanus sent out a blast about the hearing:

The only community board public hearing on Mayor de Blasio's massive and dangerous Gowanus Rezoning Proposal—twice the size of Atlantic Yards—is happening at 5:30pm this Thursday, June 3rd at J.J. Byrne Playground in Park Slope.

In order to participate, you must register. But to register in advance, the City is forcing residents to call a special phone line today or tomorrow between 10am - 5pm.

As you can see, the City is trying its best to make it as difficult as possible to participate in this hearing. THEY DON'T WANT YOU TO ATTEND BECAUSE THEY KNOW THE COMMUNITY OPPOSES THEIR PLAN.

That's why it is URGENT that you call right now and register TODAY!

Call 718-780-8280 (before 5pm) to register for Thursday's hearing. They will ask you a series of questions, including your position on the rezoning—you are not required to answer that question and/or can reserve the right to change your mind.

PLEASE REGISTER TODAY BECAUSE WE NEED YOUR VOICE IN ORDER TO FIGHT FOR OUR COMMUNITY. 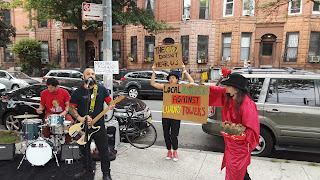 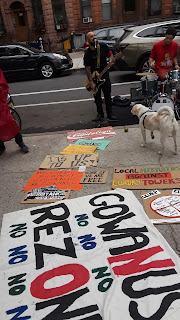 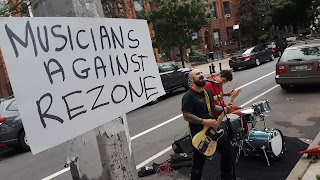 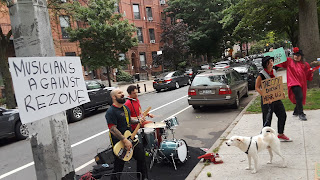 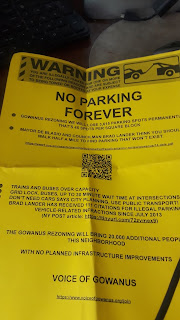 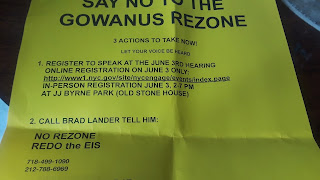 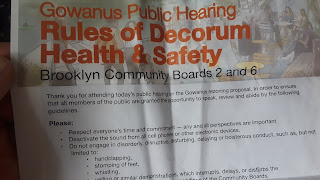 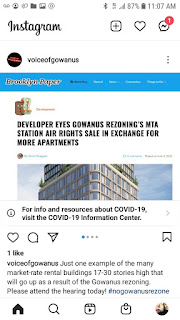 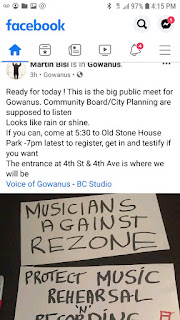 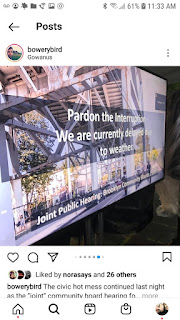 “The civic hot mess continued last night as the “joint” community board hearing for the Gowanus rezoning played out. ⚡️☔️ 🎸🗣 An in-person outdoor component only happened because of the lawsuit rightly brought by @voiceofgowanus - and @nycplanning and @bkcb6 violated the judge’s order in multiple ways, refusing to let people register without saying how they stood on the rezone, continuing the hearing after thunder, lightning and pouring rain started (which meant some people never got to speak despite being guaranteed that right under city law), and allowing multiple people - including politicians - to go unmasked in the crowd. Soon…” 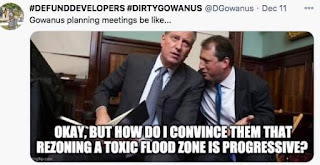 Kirsten Theodos tweeted out this photo, with the message #NoGowanusRezoning

It's packed. Great testimony in opposition to Rezoning with facts and figures. Thanks for calling out @bradlanderfor his hypocrisy. @NydiaVelazquez cos kudos for speaking out AGAINST turning Gowanus into a toilet. 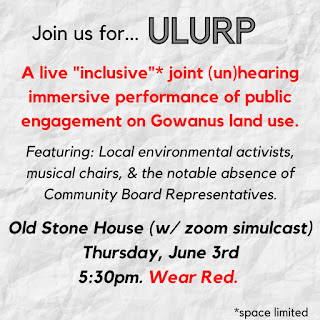 An opportunity for up to 200 CB2 & CB6 residents to weigh in on biggest rezoning of the decade / shout into the void. The ULURP has never felt so unique (illegal). Doors at 2pm, testimony beginning at 3:30pm, critical mass needed by 5:30pm. Sign up to testify. #nogowanusrezone 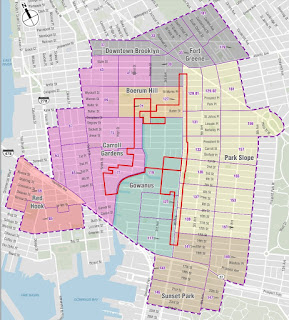 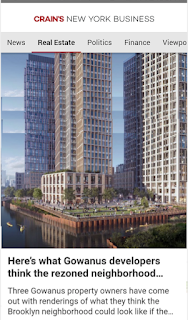 Posted by Benjamin Shepard at 10:13 AM