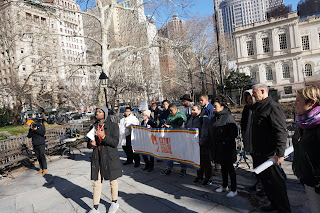 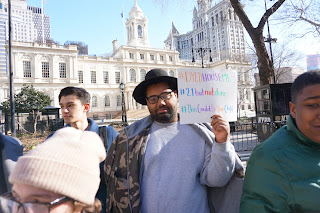 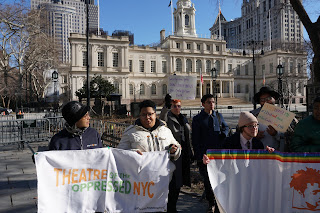 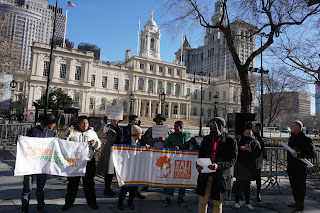 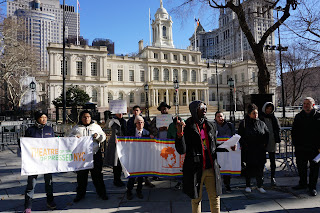 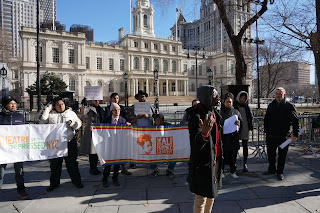 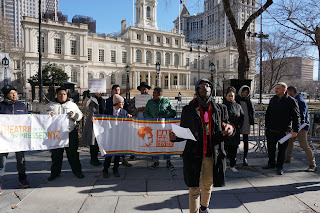 Homeless LGBTQ Youth and the organizations that support them will rally at the steps of City Hall on Tuesday to support the Runaway and Homeless Youth Bill Package, and will return to City Hall on Wednesday to pass out handmade Valentines, encouraging City Council Members to "Have a Heart" before the stated meeting.
While New York State has raised the age of eligibility for youth services to 25, many New York City youth programs are still forced to turn away youth after 21 due to the City's inaction.
On Tuesday, February 13th, I joined a group of advocates for a Rally/Presser to Support Runaway and Homeless Youth Bill Package at City Hall Park.   Supporting organizations: Queerocracy, VOCAL-NY, Hetrick-Martin Institute, Ali Forney Center, The Door, Coalition of Homeless Youth, Covenant House NY, NYC Continuum of Care Youth Advisory Board, FIERCE.

Jamie Powlovich - Executive Director, Coalition of Homeless Youth – explained that before her current position, she worked for the New York City Administration for Children's Services, a governmental agency that provides welfare services to children and their families in the City of New York.  When youth turned 21, workers with ACS regularly discharged the young people under their care into the shelter system. She still regrets that.  Today, she argues young people need support until they are 24. That’s why she supports the Runaway and Homeless Youth Bill Package.

Carl Siciliano - Executive Director, Ali Forney Center and a frequent attendee at similar press conferences – noted that he was tired of these events.  “I hope this is the last time we have to come to beg for services for LGBT youth. I’ve had enough of hearing about youth sleeping in the streets, or having panic attacks about fear of violence they encounter on the streets, or suicide attempts, or sleepless nights. I hope this is the end of us asking the city to do the right thing.  Its fifty years after Stonewall and the homeless youth who lead the riots for gay liberation are still homeless, living on the streets.”

Background on the Runaway and Homeless Youth Bill Package:
·  Extending the Age: Force DYCD to extend the age that RHY contracted programs are able to serve with city funding to 25yo (currently 21yo) as allowed by state law.
·  Extending the Length of Stay in RHY programs: Force DYCD to extend the length of stay that runaway homeless youth are able to stay in contracted programs as allowed by state law. Although DYCD has already implemented this, it is important for the bill to pass, to make it law for future administrations.
·  Awarding Runaway Homeless Youth the Right to Shelter: Formally grant runaway homeless youth the right to youth-appropriate shelter.
Tomorrow on Valentines Day, youth who are experiencing homelessness will be taking to the steps of City Hall to hand out homemade Valentine's Day cards to City Council Members before the Stated Meeting to encourage their support of homeless youth by supporting the Runaway and Homeless Youth bill package. The laws would help end youth homelessness in the city of NY.

Posted by Benjamin Shepard at 9:00 AM