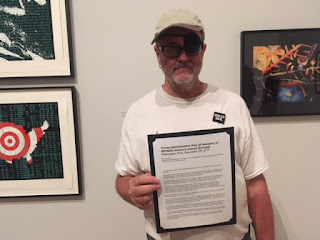 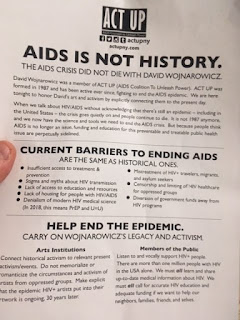 On Friday, July 27, 2018, ACT UP NY went to the Whitney Museum's evening hours and stood next to specific artworks in both the Incomplete History of Protest and David Wojnarowicz exhibits, holding framed recent news articles about the HIV/AIDS epidemic that were formatted to look like museum plaques.  (A list of these articles can be found below.)
The first goal of this action was to draw attention to the fact that the Whitney has a featured exhibition by a well-known member of ACT UP -- who addresses AIDS in much of his art, who died of AIDS -- that does not make explicit connections to the present AIDS crisis within the exhibit.  In an otherwise excellent exhibit, this is an oversight that falls into a pattern of arts institutions historicizing the activism of the past even when there are almost identical contemporary struggles.  The Whitney acknowledges this phenomenon in its concurrent Incomplete History of Protest exhibit -- and then participates in historicization anyway.  Historicization reinforces distance, a sense of "This is history; this doesn't affect me," and therefore does a disservice to present activism: People who think AIDS is over won't see any reason to donate money to AIDS-related causes, to take the most obvious example.  They also won't see any reason to tell their friends about PrEP and U=U, to take a less obvious one.


When arts institutions do not connect historical activism to the present activism being done on the same issue, they are missing an opportunity to reach an interested and sympathetic audience who might then become activists themselves, or who might at least be inspired to read up on the state of the world.  They are also keeping relevant information from their patrons, many of whom are upset when they discover they're only getting half the story.  Dozens of shocked museum-goers spoke to and photographed each of us and our plaques.  One woman plaintively asked, "How can we teach kids about HIV when teachers and adults still don't know anything about HIV?"


This brings us to the second goal, which was to draw attention to lack of education and funding for the current HIV/AIDS crisis, both in the US and abroad.  Just as the AIDS crisis of the 80s was exacerbated by governmental neglect and public ignorance, neglect and ignorance are arguably the biggest obstacles to ending AIDS now that we have the tools to do so.  There was only one article displayed that was from before 2017, and the majority of the articles we chose were from the last four months.  People gasped about HIV rates in American communities of color, and about the President firing the entire Advisory Council on HIV/AIDS -- especially as they read on and discovered the decades-old council was unpaid, composed of volunteer experts.  ACT UP members standing near our Gran Fury friends' fantastic "Women don't get AIDS, they just die from it" poster (located in the Protest exhibit) held articles about how women are afraid to use PrEP, and how anti-PrEP fearmongers copy the rhetoric of anti-contraception fearmongers.  Teenagers and young women, pulled in by the recent dates and the presence of living humans, stood and read and asked questions about this complex subject.


In other words, in just one hour, we facilitated hundreds of short, personal conversations and revelations about dozens of ongoing HIV issues.  How did we do this?  By explicitly connecting the past to the present for all the patrons, and not relegating those connections to special panels or events for people who are likely already informed about HIV.
Obviously we are able to use tactics for audience engagement that a museum may not have the resources or expertise to do, but that's no excuse not to try.  Nowhere in the exhibit does it even mention that Wojnarowicz was a member of ACT UP, despite the fact that you'd be hard-pressed to find an artist or activist who hasn't seen a picture of his infamous jacket, worn at ACT UP demonstrations:

On the plaque for the work "Untitled (ACT UP)" in Gallery 12, there is only the barest description.  We chose to stand there with the ACT UP mission statement and an excerpt from a recent op-ed by ACT UP cofounder Larry Kramer in which he talks about how he's not a hero just because he was angry enough to do something.  Many of the other works have long, well-thought-out plaques; the Whitney could take a step toward our first goal of dehistoricizing AIDS by giving "Untitled (ACT UP)" the real description it deserves.


But to report on this action as though it's only about the Whitney is to miss the point.  Taking steps toward our second goal -- the public support needed to finally end AIDS -- will be more complicated.  Most of ACT UP's actions are fundamentally about what has been described as "dangerous complacency" by numerous HIV experts in the last two weeks alone.  We use instances of complicity to call attention to the complicity of society in general.  Any article about this action that does not primarily focus on how serious the HIV crisis continues to be, however well-intentioned, reproduces the Whitney's error in judgment.

http://www.dazeddigital.com/art-photography/article/40850/1/act-up-protest-whitney-david-wojnarowicz-retrospective
--
Posted by Benjamin Shepard at 2:02 AM