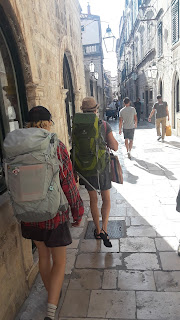 We got us early, walking through the old town one more time, to meet our ride, just outside the city walls.

Jasmin, our driver, was right on time to drive us  to Mostar, the city in Bosnia and Herzegovina.

Not in the Eurozone, it was to be a hard border, with a checkpoint to go over passports and vaccination records.

We thought it better to have someone familiar with the language to help get us through.

“The last couple I drove was turned around because their child was not vaccinated.  They had to wait five hours only to be turned away,” said Jasmin, a veterin with a limp.   He fought in the army as a  16-year-old boy during the Homeland War of 1991-1995. “I never smoked before but i was so scared.  I had a gun in one hand and a cigarette in the other to calm my nerves.”

Driving with one hand around the curvy roads of the Dinaric alps, gesturing with his driving  hands, his other hand unable to move, it felt like the car was going to fall off the hill.

At the two borders, not a problem.

We talked about the new bridge that will connect Croatia with Europe without the often timely detour and checkpoints.

Back in Croatia, we drove through the Republic of Srpska, a self proclaimed Serbian state founded in 1991 and dissolved in 1995.

We talked about the US ship in Split Croatia as a symbol and a show of strength.

The tensions in the area are still very real.

“It really was a war of religions.  In the US everyone is a citizen.  In Yugoslavia, it started that way. But after Tito died, it became that the Croats were Catholic, the Serbs orthodox, and the Bosians Islamic.”  Yet, Bosnia’s religious makeup is far more diverse, with half Islamic, another third Eastern Orthodox, and 15% Catholic. “There are still big tensions here. It used to be far more diverse. But today this area is 95% Catholic, 5% Islamic.” The Ottomans brought Islam to this area. They ruled for some 400 years.

“All religions say the same thing: Don’t lie. Don’t kill. Don’t steal.  But the people make the problems,” says Jasmin, referring to a politics of control and conflict that is all too familiar here.  The Bible says a lot about fighting the poverty and supporting the poor, not that you hear about it much.

On we drive past a war memorials for Serbs killed in the war. And then to Radimlja, a necropolis near Stolac, standing stones thought to be magic.

Jasmin takes a cigarette break and cracks a few jokes.

“I think I’ve driven ten million miles on these roads,” he says.  “At least I’ve lived,” he sighs. “God gave me a second chance..  I’m meeting people I like, going places.” A pause.

“I took this ride because of your name, Benjamin.  It's a good name, like Benjamin Franklin.”

Throughout the ride, he laments the war and his fortune.

“In Bosnia, they have money for churches, but not roads….”

A huge part of the conversation is about history.

My motto, do unto others as you would have them do to you.”

Driving into Mostar, he comments on the strip malls and chain stores we see.

“Factories were here. But they were destroyed by the so-called privatization.  The workers were all kicked to the curve with no money to buy anything in the malls.”

“There was a concentration camp there during the war. My cousin was there.  He was tortured.”

The Muslim cemetaries were practically empty before the war. Now they are full.”

Over and over, he referred to the December 6, 1991 bombing in Dubrovnik.  For him, that  was was the worst during Homeland war.  But the massacres during this time were many.”

Ethnic cleansing worked here, he says, shaking his head. I asked if the US was too early or too late in our intervention. “Too late.  This was mostly Muslim.  But they moved out to the country. The ethnic cleansing was real.”

He refers to what sounds like the Stari Grad, where people used to live in harmony, before they took up sides, even on the bridge.  Instead of living together,  the bridge fell into the water. Mostar’s Old Bridge was built in 1557, connecting ridging east and west, before it was bombed 1993, and rebuilt 2004.  Bombed out buildings still line the boulevard outside it, buildings still without roofs, all these years later.

This is where Jasmin drops us off.

Be well and thank you.

People are jumping off the Old Bridge when we arrive.

We stand looking from the Lucki bridge down the way.

On we walk through an old bizarre along an area known as Oneseukova, taking in the distinct, almost Turkish vibe. This is something I’d wanted, to see and feel something different, something outside our world.  The bizarre is a little light. But it still reminds me of Istanbul.

But full of surprises.  At the bathroom, someone passes me a dick pick under the stall.  I'm not sure. But the little family restaurant didn’t seem too cruisy. With repression, usually comes some form of of expression.

On we walk down Coppersmiths’ Street to the Koski-Mehmet Pasha Moske. A majestic sacred space, women are praying to my right. light pours in. Whimsical, the windows and paintings seem to resemble a face.

Caroline and Scarli do not go inside. The restrictions and requirements that women cover their legs and shoulders grow tiring.

Down from the mosque, the Neretva River runs through the town, with a view of the Old Bridge and the Old Town and the Radobolja Valley, mills and trees, some people sunbathing, connecting the movement through history.

We stroll to  the Genocide Museum is closed.

Across the street is the Karadozbeg Mosque,  commissioned by the Ottoman Sultan in 1557 and bombed in 1993 the same year as the old bridge.

Another cemetery is in back.

There has been a lot of loss here.

Down the Bulevar we walk, snapping photos of graffiti from Red Army  1981, for an old soccer team, and crumbling buildings.  It had been an bustling avenue.  But when Bosnia followed Croatia and Slovinia’s  path toward independence in 1991, the Serbs fought back.  At first the Croats and the Bosniacs worked together.  But soon started fighting, Catholics vs Muslims.

The whole street was bombed.

Bullet holes and bombed out buildings are everywhere, a reminder of the incomplete, messy conflict that took place not that long ago.  It doesn’t feel quite complete.

Caroline and I imagine what it would be like if such a conflict exploded in the US.

Jasmin watched January 6th in the US with similar misgivings.  He could not believe that was happening in the USA.

There are a lot of guns in the streets.

On we walk to the train station.  An elder woman points us in the right direction, joking with me about my broken Spitalian… bad Italian and Spanish.

Woman run many of the empty shops.

There’s not much business.

The war didn’t really help anyone.

It's a lament you hear over and over here.

At the train station, we settle in for coffee and beer and a rest.

“Whenever, I think I am overwhelmed with my life, I think of what people are going through in places such as this,” says Caroline.

It's all very alive here, the new cemeteries, full of fresh graves, people who should be walking these streets, the culture wars, and age old clashes between East and West.

Our trip to Mostar, was a journey into a place outside ours, beyond uber capitalism, and hyper commodification of everything, into something else, a place that was very recently a harmonious blend of religions and ideas,sharing in a joint moderation, turned hot zone, subject to ethnic cleansing, rape camps and war.  Thirty years later, the rebuilding continues, with little in the way of truth and reconciliation.

Our train is about to leave for Sarajevo. 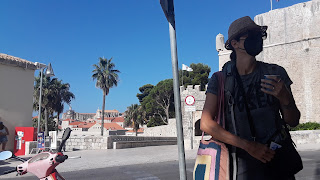 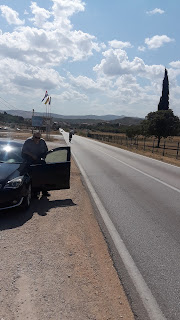 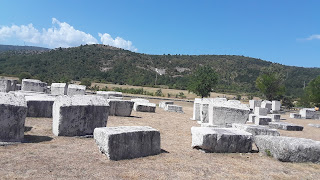 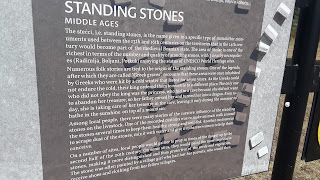 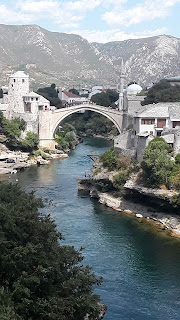 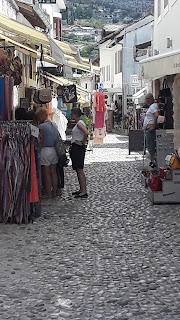 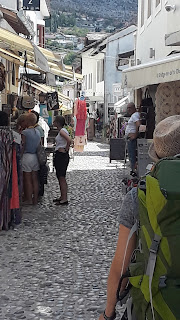 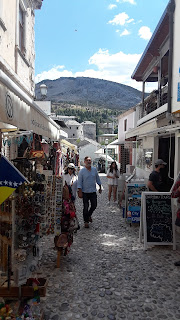 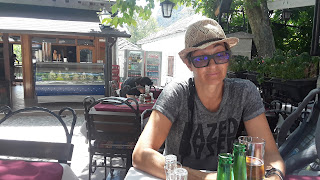 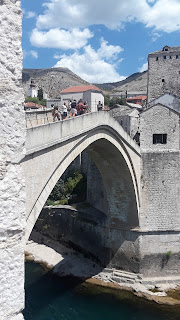 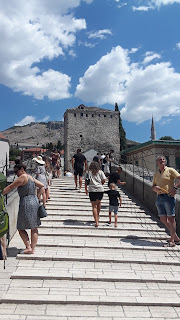 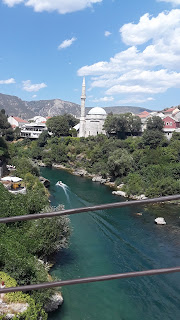 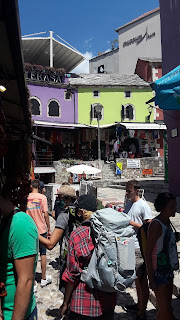 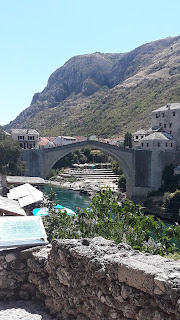 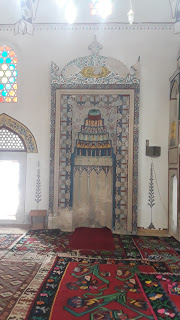 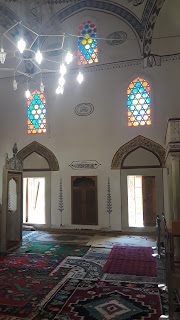 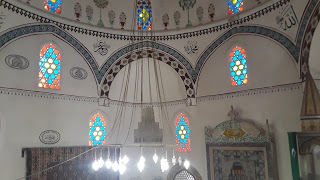 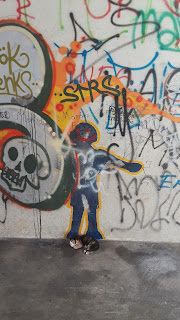 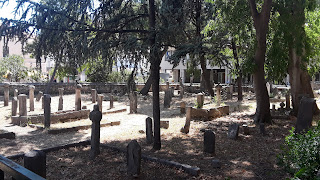 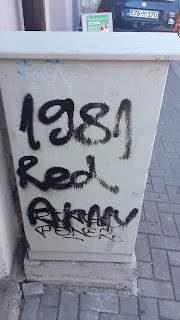 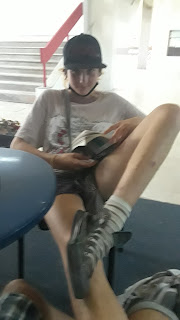 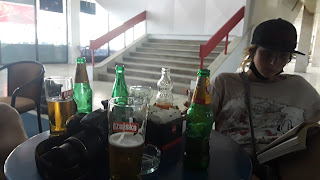 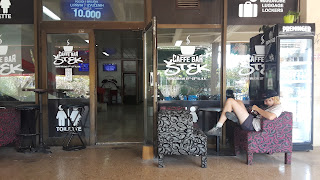 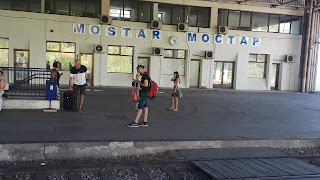 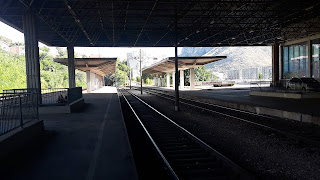 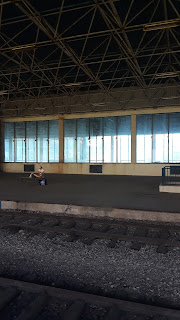 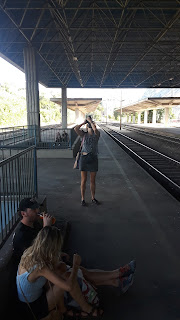 Posted by Benjamin Shepard at 1:57 AM