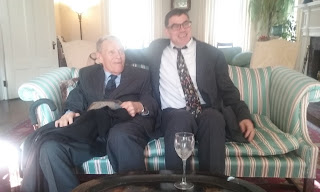 James Knill, Mr Nill as we knew him, was the best kind of neighbor.  We knew him in the 1970's when the Knills lived down the block and never lost touch - even years after we all moved away.
There are few people one can with who have literally known you your entire life. But that was Mr Knill.

I have this memory of playing on his tractor in his back yard, riding around in the big back yard, acre after acre, all day laughing.  And telling lots and lots of lies with his son Jamie.  They were always my favorite neighbors.

They drove me up to Poughkeepsie to their farm and shared stories about life in Ontario, Canada where he hailed.

He laughed and laughed at my father, even when others found his bellowing in bad taste. He was
big enough to feel comfortable around the old man, two old school guys who both found the best in each other.

He was there when I drove mom's car into the ditch in 1972 and he was there with his wife at our wedding in July of 2001.  He sat with my father in law and they laughed.

When he found out I was an AIDS activist, he told me about his run ins with ACT UP, including
those protesting at workplace at Squibb.  He made a living developing life saving medications. And saw the AIDS activists as loud advocates.

But most of all, he was a friend.

The last time I saw him, he was there when mom's second husband David died, attending the funeral in early 2016.  We talked for what seemed like hours.  I had a feeling there might not be more conversations like that. And it was true. 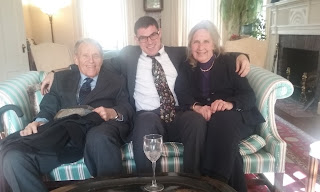 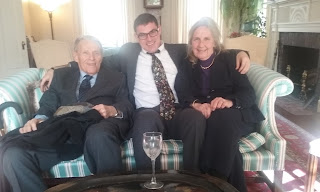 Dr. Knill completed his residency in Internal Medicine at the University of Western Ontario, London, Ontario and
Fellowship in Gastrointerology at Tufts University  School of Medicine in Boston, MA, after receiving his M.D.
and his  MSc  in Physiology. Dr. Knill also received an MBA at the  Wharton  School, University of Pennsylvania,
Philadelphia, PA.
Posted by Benjamin Shepard at 10:10 PM