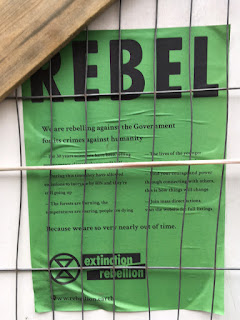 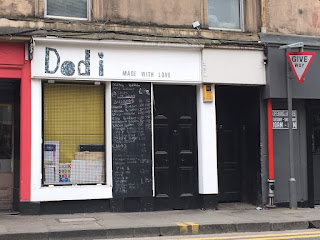 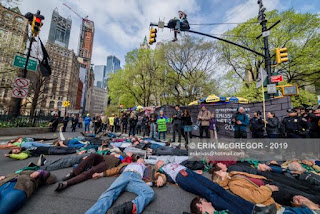 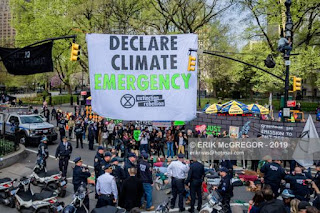 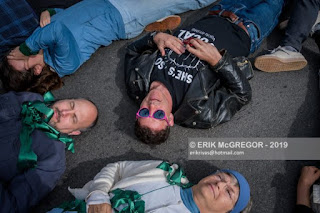 bs and company at XR by Erik R McGregor 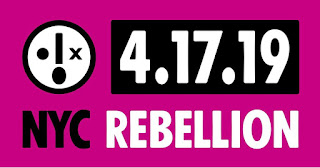 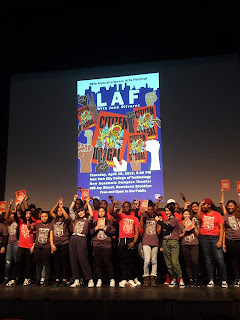 “I love that every time I run into you, I know shit is about to go down,” my friend Vanessa commented after we got out of jail last week. “Always a pleasure  to be arrested with  you.”
We were part of the 62 people arrested in New York, acting up for the Extinction Rebellion,  demanding the city of New York,  that the world acknowledge the problem, identify solutions and act on them asap.
Feel the fear I fear and act on it, implored Greta Thunberg.

Its terrifying and strany beautiful,
the eros effect connecting
local actions with global movements.
I’ve felt it in the AIDS and the global justice, anti-apartheid and black lives matters movements.
I felt it in LA Riots in 1992.
I felt it as a kid watching Quadrophenia with the mods battling the rockers.
I ate blue pills and wore a bomber jacket just like they did.
The direct action world connects us in these ways,
music and dreams.
Sex and wanderlust.
Hope and despair pulling and lulling.
It’s a way of commuting with the living and the dead.
When I get arrested, I always think of my heroes, living, long gone, and somewhere in between.
Keith Cylar keep up the struggle,
We chanted after Keith died, getting arrested once again.
Wash your ass, Wash your ass, we screamed walking down Sixth Avenue after Bob passed from this world into the next, a Stonewall Veteran who never sat on his laurels.
I always think of him,
Of them.
When I take a bust.
Connecting those experiences with new ones, new friends,
People who were part of old actions,
Expanding a maze of interconnections,
Between here and there.
And where we are going.
New movements building on  past movements,
The Extinction Rebellion is expanding every day,
People blocking roads,
Playing yoga in  the  streets,
Sticking their bodies to public transportation.
The kids are taking the lead,
I hope they are ok.
The traumas they are contending with – the live shooters,
The violence, the neglect, the climate  in flux,
Fears, something gripping the kids.
All the kids, anorexia nervosa, text phobia, Prozac, suicide fantasies,
The world as we know is leaving them holding the bill.
“Since our leaders are behaving like children, we will have to take responsibility they should have taken a long time ago,” Greta told UN climate change summit..
“We have  to understand what the older generation has dealt to us, what mess they have created that we have to clean up and live with.  We have make our voices heard.”
The day after the bust
the kids ran our literary arts festival at the college.
Reminding  us of our more  abundant narratives,
Caroline H read Whitman:
“America must welcome all—Chinese, Irish, German, pauper or not, criminal or not—all, all, without exceptions: become an asylum for all who choose to come. We may have drifted away from this principle temporarily but time will bring us back. The tide may rise and rise again and still again and again after that, but at last there is an ebb—the low water comes at last. Think of it—think of it: how little of the land of the United States is cultivated—how much of it is still utterly untilled. When you go West you sometimes travel whole days at lightning speed across vast spaces where not an acre is plowed, not a tree is touched, not a sign of a house is anywhere detected. America is not for special types, for the caste, but for the great mass of people—the vast, surging, hopeful, army of workers. Dare we deny them a home—close the doors in their face—take possession of all and fence it in and then sit down satisfied with our system—convinced that we have solved our problem? I for my part refuse to connect America with such a failure—such a tragedy, for tragedy it would be.
America has its purpose: it must serve that purpose to the end: I look upon the future as certain: our people will in the end read all these lessons right: America will stand opposed to everything which means restriction—stand against all policies of exclusion: accept Irish, Chinese—knowing it must not question the logic of its hospitality.”
Our students reflected on the questions running through their heads:
““Not everything that is faced can be changed, but nothing can be changed until it is faced.” ― James Baldwin.
One of the MC’s repeated over and over again.
Think  about that.
The tides flow through our lives here,
Bringing rising seas and ideas.
And lots of ideas.
“Maybe I’m still trying to figure out who I am?
Maybe we are still  trying to figure out who we are…”
All through the festival I’m  thinking about our day  in jail during the Extinction Rebellion,
The dozen hours of conversations.
The dialogs with Sylvia R and Leslie F, who I met in that same holding pen in 1998 after Matthew Shepard was killed.
Oh Keith and Charles and my PSC comrades who were there with me three months prior.
On my RTS friends from June 18 1999 whose sticker still adorns the cell.
No Police state, someone scratched on the door.
And the groups we held all afternoon.
Lets popcorn through feelings.
What’s said in group stays in group.
I feel angry that ... I feel grateful that...
I feel sad that.... I feel happy that...
I feel afraid that ... I feel secure (or hopeful) that...
I feel guilty that... I feel proud that ...
The confessions, the conversation, the dialogue  through time.
The friends who supported us when we got out.
The Extinction Rebellion and an echo through time.
““Not everything that is faced can be changed, but nothing can be changed until it is faced.” ― James Baldwin.

Posted by Benjamin Shepard at 10:25 AM