“all ye who enter here abandon good taste. ”: and other reflections from the best organizer of my generation, RIP Andrew Vélez 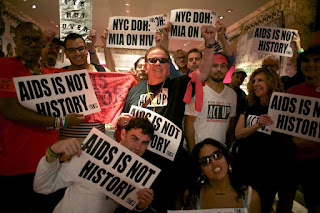 Velez as I remember him, smiling,  leading, and joking. 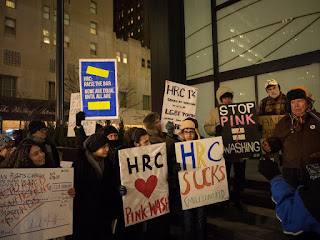 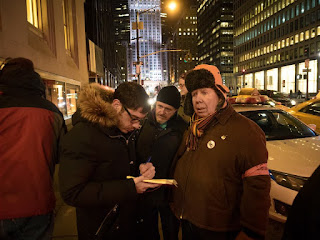 Unknown activist, Jamie Leo, and Andrew Velez. 2015. HRC dines at the Waldorf while LGBT youth sleep in the streets. 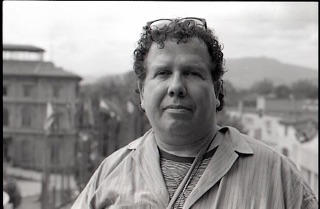 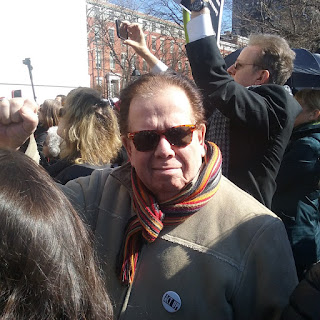 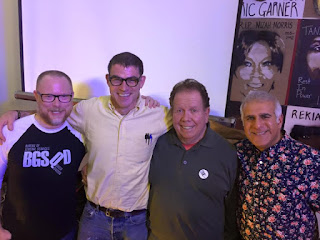 Greg, this  blogger, Andy, and Jay,
after  speaking on Rebel Friendships.
November 2015. Photo by Jamie Leo. 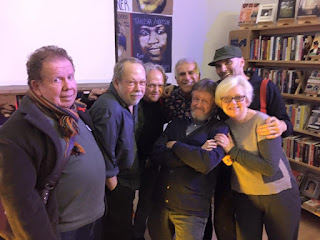 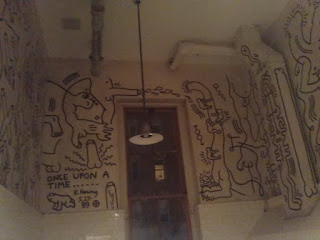 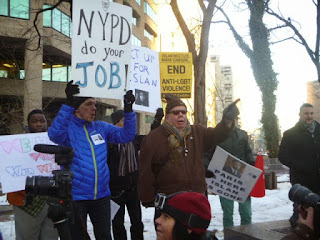 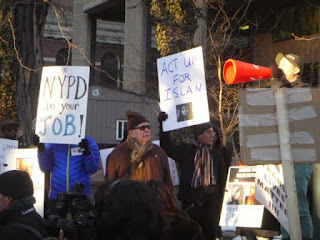 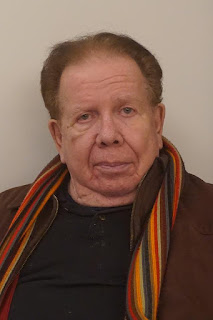 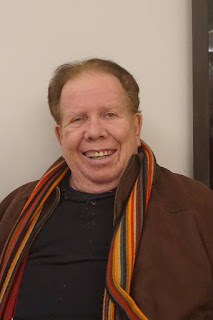 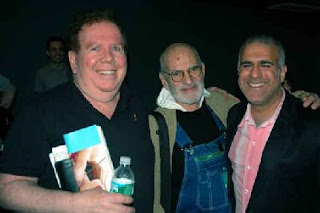 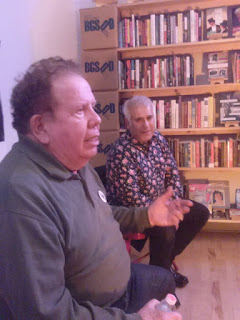 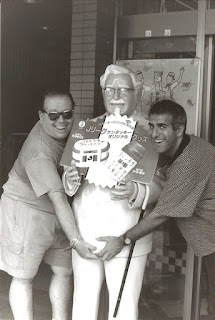 Andy and Jay, over three decades of rebel friendship. 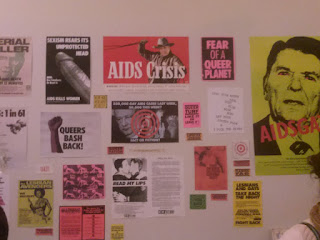 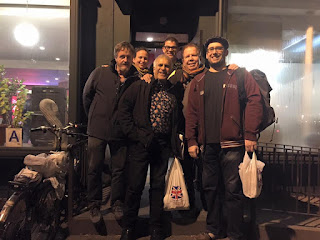 Jamie,  Emily, Jay, this blogger, Andy and Brandon after the reading. 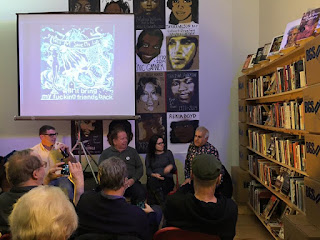 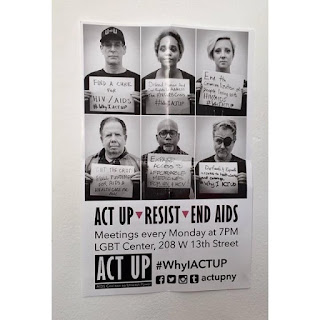 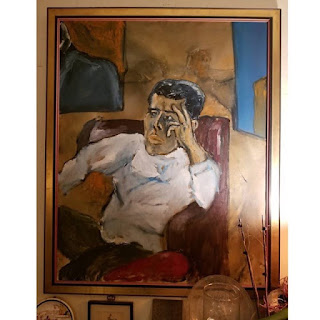 15 hrs ·
“I am heart broken. My dear friend Andy Vélez has passed. I loved Andy like a brother. Andy no doubt attended more ACT UP meetings than any other person - almost never missing an ACT UP meeting since 1987, week after week, up until his recent fall and hospitalisation.
I attended many many demonstrations with him and worked with him planning many actions, press conference, and conference panels at AIDS Conference in several countries around the world. I also had the pleasure of being part of the Liaison Team he Chaired in several countries.
Andy always made me laugh, he always had something witty to say about everything.
Andy, you were a hero, a wonderful Activist and I will miss you dearly!”

Peter Staley is with Andrew Velez. 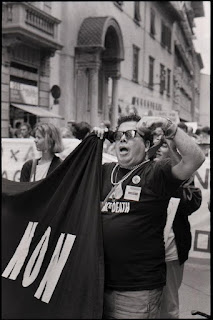 “About Andy ...
Emma Goldman refused to be part of a revolution where she couldn’t dance. My comrade Andy Velez, who died on May 14 at age 80, felt the same way.
As a leader in ACT UP and the AIDS activist movement, Andy was happy to do the hard work.
I can’t count the times he attended government hearings, lobbied politicians, handed out condoms, manacled himself to gates, spoke at funerals, and risked arrest over the course of 32 years of service to the LGBTQ+ and AIDS communities.
But immersed in this living hell, Andy also knew the importance of wicked fun. He’d invoke it during our life-or-death battles. To save our sanities.
Andy dressed in jewels and brooches for demonstrations. He created protest signs that simply said, “Cut the crap!” And when we found ourselves in a jail cell after a protest, he insisted we all sing 60s girl group songs.
If you accused Andy Velez of excess, he would promptly remind you that good taste should never get in the way of defiance.
His irreverence provided a laugh at crucial times during the early Plague Years, helping balm frayed nerves or crushed spirits as we continued to fight for our lives.
I learned sass, courage, wisdom, and hope from my ACT UP comrade Andy Velez. Being 21 years my senior, he insisted I call him Mother. In turn, he called me Sisterwoman from “Cat on a Hot Tin Roof.”
A diehard movie and musical theatre queen, Andy gave me a bonus education while in the trenches. I learned the difference between Marie Dressler and Maria Callas, Eddie Cantor and Eddie Fisher.
Thanks to his stacks of original cast albums on vinyl, I learned the magic of Sondheim and Rodgers & Hart. In 1990 and 1991, Andy hosted a Broadway Musical class at the New School in Manhattan. He made me his teaching assistant, so I got to meet legends like Barbara Cook, Sheldon Harnick, Elaine Stritch and Kander & Ebb.
Life was truly a banquet with Andy. I owe much to this indefatigable and fabulous soul. So does the rest of the world.
Andy Velez ... presente! (March 9, 1939 - May, 14 2019).” — by Jay Blotcher
📷 © David Williams (1991)
📷 © @billbytsura
📷 © @billbytsura
📷 © Kevin Robert Frost (1994)
#whatisrememberedlives #theaidsmemorial #aidsmemorial #neverforget #endaids


Andy Velez was the Emma Goldman of ACT UP. He refused to be part of a revolution where he couldn’t dance.
He protested like a warrior. But he added irreverence to the mix. Andy dressed in pearls and jewels for demonstrations. His naughty jokes would easily defuse a stand-off with cops. When we were thrown into jail after a protest, Andy led us all in 60s girl group songs. Or at ACT UP meetings, when some blowhard went on too long, Andy would hold up one of his trademark laminated index cards that would say “Sit Down!”
Andy’s difficult past provided the fuel for his activism. A punishing childhood. Being jailed in 1964 after homosexual entrapment. Navigating a bitter divorce. Coming out at a time when gay was synonymous with AIDS. Andy possessed life lessons that most of ACT UP didn’t.
So Andy would guide the hotheaded youngsters. He modulated our fury. He knew that if you always carried anger in your gut, it would destroy you.
And woe unto the person who accused Andy of excess -- or suggested he tone down his tactics. He would fix that individual with a pitying glare and explain that good taste should never get in the way of defiance.
Andy was a supreme movie and musical theatre queen. I was one of his keen students. While I was learning AIDS activism in the trenches, Andy gave me a bonus education. Thanks to him, this diehard rock n’ roller learned the difference between Marie Dressler and Maria Montez, between Eddie Cantor and Eddie Fisher. Andy’s crash course included wicked Merman anecdotes. And mercy, that Monty Clift story. But I digress…
Andy bestowed stacks of his old vinyl on me. I enjoyed a steady diet of Sondheim, Jule Styne, Rodgers & Hart, Archie & Mehitabel. I officially became a musical theatre queen in training.
The tutelage escalated. In 1990 and 1991 Andy hosted a Broadway Musical class at the New School. He made me his teaching assistant, so I met the legends: Barbara Cook, Betty Comden & Adolph Green, Sheldon Harnick, Kander & Ebb. And I rescued him one afternoon from a hostage situation in his apartment – perpetrated by Elaine Stritch.
Many stars became Andy’s friends. Not because he was a fawning fan. But because he was honest. He dazzled them with his encyclopedic knowledge, but also dispensed critical analysis that was illuminating.
Andy was an enthusiastic lover of the arts. But a discerning one. In 1995, we went to Rainbow & Stars to see Lorna Luft. Bless her heart, she was no Judy Garland. Nor even a Liza Minnelli. Halfway through the concert, Andy pushed a cocktail napkin across the table. On it he had scribbled “Gee, this sucks, Sally.” I spent the rest of the show squelching giggles.
So we come to this sad day. Even on the matter of death, Andy offered comfort and enlightenment. In 1988, my mom died. I was 28. I was a mess. I had only known Andy a few months in ACT UP, but he was there for my mourning period. Andy shared profound wisdom at the time. I was too grief-stricken for it to register. But the way wisdom works is that when you are ready to hear it, it comes through loud and clear.
Andy explained, “When a loved one dies, the conversation you are having with them does not end. The way you communicate simply changes.”
So, Andy, let’s keep the conversation going. Right now, I suspect you’re hobnobbing at one hell of a cocktail party, clinking glasses with Marlene, Eartha, Barbara, Betty & Adolph, Stritch, and, of course, your beloved Muggsy.
Keep the party going until we get there. Because we will reunite, just as the lyrics tell us in another gem Andy loved: the ballad “Some Other Time” from “On the Town”:
Just when the fun is starting,
Comes the time for parting,
But let's be glad for what we've had
And what's to come.
There's so much more embracing
Still to be done, but time is racing.
Oh, well, we'll catch up
Some other time.
Eliza Pelham Randall Tis a Fearful Thing
‘Tis a fearful thing
to love what death can touch.
A fearful thing
to love, to hope, to dream, to be –
to be,
And oh, to lose.
A thing for fools, this,
And a holy thing,
a holy thing
to love.
For your life has lived in me,
your laugh once lifted me,
your word was gift to me.
To remember this brings painful joy.
‘Tis a human thing, love,
a holy thing, to love
what death has touched.
- Judah Halevi 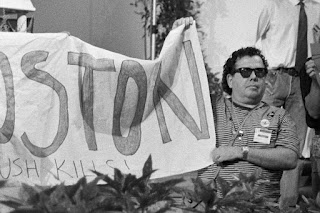 Posted by Benjamin Shepard at 3:42 PM