Statement: New Yorkers Must Be Kept Safe on Our Streets and Sidewalks 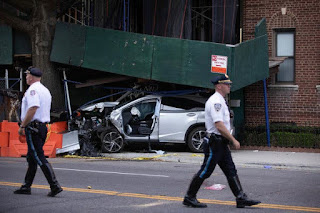 The driver had been traveling north on Ocean Avenue. CreditCreditKevin Hagen for The New York Times

I'm fuming.  Nearly a decade into Vision Zero NYC is getting more dangerous, not less.
Yet the Mayor favors car culture.  The whole city has to be a slow zone. The whole city.
There are just too many pedestrian deaths.

Statement of Danny Harris, Executive Director of Transportation Alternatives, in response to a fatal Brooklyn crash in which an SUV driver killed a 10-year-old boy standing on a sidewalk:
“In Midwood, Brooklyn this afternoon, a 10-year-old boy waiting for the bus on an Avenue L sidewalk was killed by an SUV driver who has received at least four summonses for speeding in school zones. The entire Transportation Alternatives and Families for Safe Streets community sends our deepest condolences to the boy’s family.
This tragedy is a testament to the fact that there is virtually no place in the city where residents are safe from the onslaught of cars -- not in the crosswalk, not in the bike lane, not even on the sidewalk.
Crashes like these are not accidents, but the preventable and predictable result of a city where cars, not people, are the priority. As a result, children like this 10-year-old boy and hundreds of others pay the price with their lives each and every year.
We will never see an end to traffic violence if we don’t make safe street designs the standard across all five boroughs. The City Council and Mayor de Blasio must act immediately to pass Council Speaker Corey Johnson’s Transportation Master Plan Bill, Council Member Brad Lander’s Reckless Driver Accountability Act, and expedite delivery of the mayor’s Green Wave Plan. To do anything less would be an insult to the families of the thousands of New Yorkers killed by unsafe streets and deadly drivers, and put countless more residents at risk.”

Posted by Benjamin Shepard at 7:41 AM