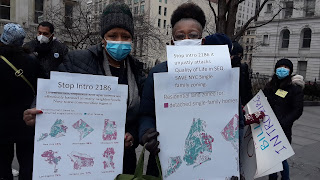 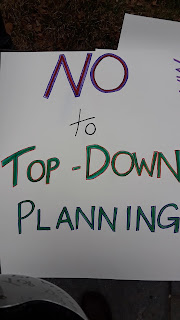 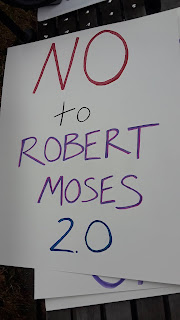 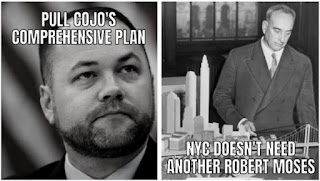 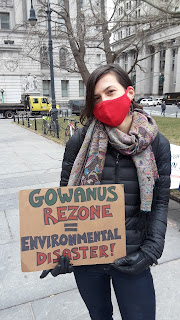 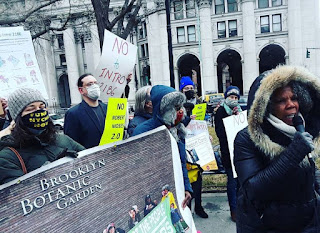 Alicia says #nointro2186 #nodevelopergiveaways Its a top down plan to give away our communities. We're here to say no. 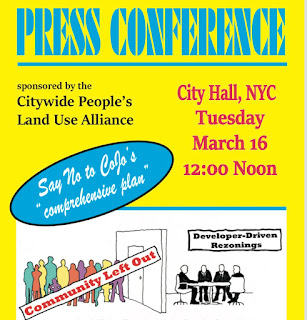 Say #nointro2186 From Gov's Island to the Gowanus the developer giveaway is on. Public space for the people. We don't need another Robert Moses style urban renewal. Its up to us to say no. 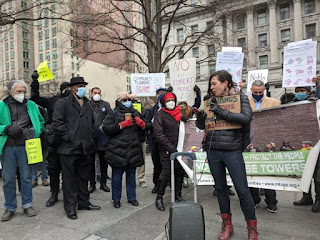 NEW YORK CITY: On February 23rd, the Committee on Governmental Operations held a hearing on Speaker Johnson’s “Comprehensive Planning'' bill, Intro 2186 that establishes a 10-year planning procedure for the city. The City Planning Commission testified first (with unlimited speaking time), vehemently opposing the bill. Four hours later public testimony began, at which point most of the Councilmembers had already left the hearing. Not even the bill’s prime sponsor, Speaker Johnson - and only one out of eleven cosponsors of the bill - bothered to stay and listen to public testimony, the majority of which was in opposition to the bill.

Though this is par for the course at City Hall, what was unexpected was reducing public speaking time from three minutes to two minutes, a significant reduction. And elected officials misrepresenting the facts about the bill.

The sham hearing displayed utter disinterest and disregard for community response and input in the same way that Johnson’s “comprehensive planning” does.

City Planning Chair Marisa Lago rightfully accused Johnson’s bill of being a “top-down” proposal that would add an additional layer of bureaucracy. Chair Lago is correct, the bill would create a “Director” who is essentially a 21st century version of Robert Moses with unprecedented powers such as establishing the “Citywide Goals Statement'' which would outline citywide targets for population growth in addition to whatever else he or she  “deems appropriate.”

This all happens before a single public hearing takes place, thus deliberately excluding the community. As it currently stands, the community has very little input in land use decisions and this bill does not solve this.

The bill requires creating three land use scenarios for each community district that prioritize population growth, a process that Chair Lago estimated will cost at least $500M. The new Robert Moses then submits draft comprehensive plans to the Community Boards and eventually to City Council to select one. The purpose of the draft comprehensive plan is “to prioritize population growth, where applicable, in areas that have high access to opportunity and low risk for displacement.”

Although the law explicitly and clearly states the Director’s ultimate power, Speaker Johnson berated Lago and insisted that the Director does not have that power. The Speaker also claimed communities will have input into the plan because the city will look at the district’s needs assessment. However nothing in the plan requires the city to address those needs, thus making it only an informal “wish list”. The only thing that is a mandated requirement in the plan is increased building height limits.

We are flabbergasted at Johnson’s alternative facts and total misrepresentation of the bill, in addition to his disingenuous claim that his plan would address “racial injustice” - a concept he blatantly ignored when he supported the racist rezonings of East Harlem, East NY, Jerome Ave, Inwood and Flushing.

Intro 2186 is a “top-down” proposal that excluded community input when it was drafted, as evidenced by several Community Boards who testified they had no idea this plan was coming let alone were asked to participate in drafting the legislation. The reality is the bill takes power away from the community districts because it consolidates power in the Mayor’s office.

We acknowledge that comprehensive planning is essential but it should be community driven from bottom up, not the other way around. NYC doesn’t need an all-powerful Robert Moses-like figure to set housing targets for already crowded pre-determined neighborhoods and a bill with such long term implications should not be passed when the majority of the bill’s sponsors are termed out and will not be here to deal with the repercussions. For these reasons, Intro 2186 should be pulled until the community gets a seat at the table in drafting a bill to create a real comprehensive plan that increases community input and does not diminish it.

Friends and Residents of Greater Gowanus

Justice for All Coalition

Movement to Protect the People (MTOPP) 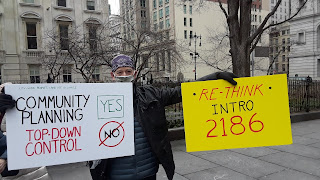 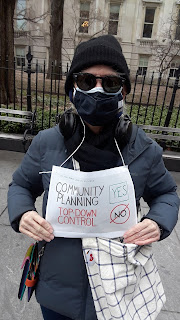 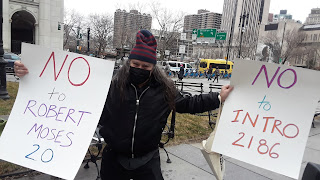 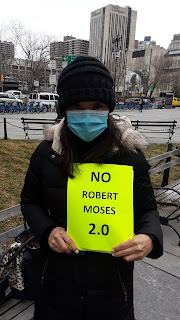 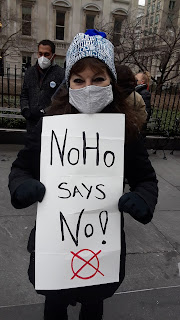 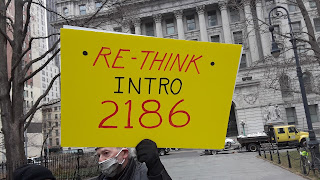 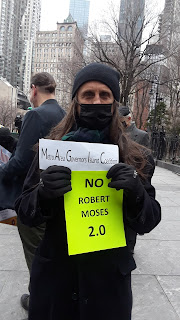 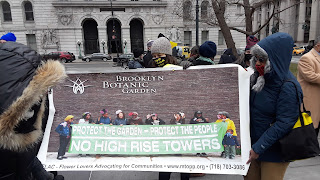 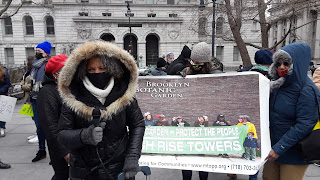 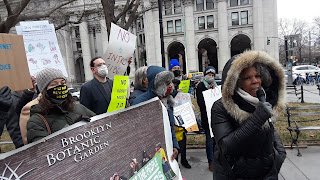 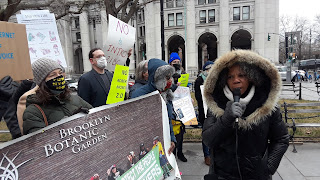 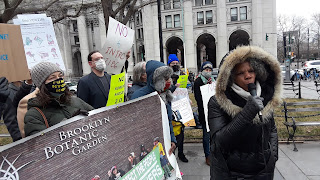 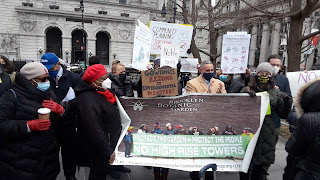 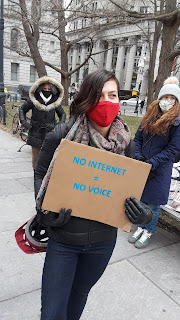 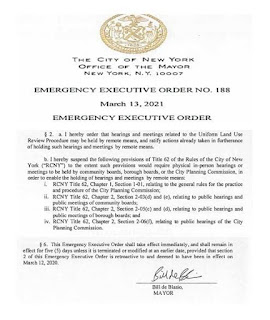 "Please note the OUTRAGEOUS and UNDEMOCRATIC 'emergency' fiat by ... deBlasio...matters not that elders-or tech-limited residents of communities who want to weigh in on the so-called ULURP "public process" in person are now precluded-prevented-stopped(!) from doing so by an UNCONCEALED deference to his Big Real Estate pals. It is NO COINCIDENCE that rezoning ULURP matters for both Gowanus and 960 Franklin Ave -with TRO hearings in Court NOW underway- are being sidelined by this." 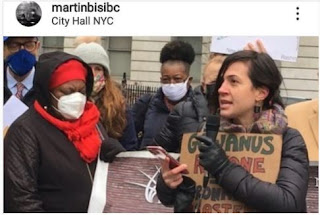 Nora Alameida, of Voice of the Gowanus, says:

"Good afternoon. Thanks for having me here to represent Gowanus, where we’ve been fighting against the largest upzone in the last decade in NYC in a Fema A flood zone on the banks of a superfund site.

Like all of you who are paying attention to land use issues in your own neighborhoods, I know that current city planning processes are mired by corruption, bureaucracy, and suffer from lack of real community input. These processes have contributed to inequity, profound environmental issues, and a housing crisis that has only worsened in the wake of COVID.

However, the “comprehensive plan” introduced by Speaker Johnson is not the solution to these problems. Instead it is a top down, hierarchical project that will prioritize “growth” as the blanket solution to the housing crisis (and we’ve all seen how well this has worked so far).

This bill promises to fix unique community problems with a one-size fits all development solution without anything more than performative community ‘consultation’ while giving a Mayoral appointed Director almost total control over planning.

The reduction of community engagement opportunities is stark.

The recent hearing about “comprehensive plan” No. 2186 is a great example of the kind of community involvement that the authors of this bill have in mind. The hearing, held on Feb 23rd, took place during the workday and lasted for almost 7 hours. It wasn’t until 4.5 hours into the meeting that community members were allowed to speak at which point, Speaker Johnson and many other councilmembers were no longer even present at the meeting to hear from the public.

Even the minimal process of presenting this bill at CB meetings for input would fail to reach many of the residents most disenfranchised by zoning changes since all of these meetings take place virtually and there are no accommodations for low-income residents who lack internet access or access to technology.

City planning is in crisis but certainly don’t need a top-down plan rushed through a council on their way out the door without community input to resolve it."

Posted by Benjamin Shepard at 10:40 AM