Rise and Resist against White Supremacy, on Vietnam, Racism, and Trump 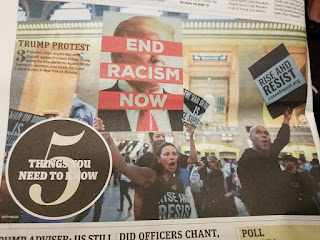 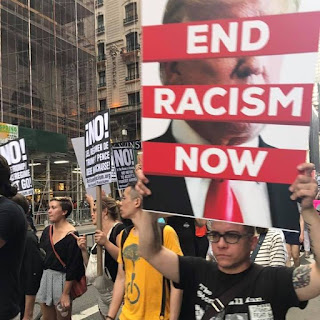 For the last few nights, I have been running home to watch the Ken Burns and Lynn Novick's
documentary The Vietnam War.

Tracing the history of this mess, each night it gets worse.  My uncle who served in the war 101st airborne and I have been corresponding about the horrors. The first episode traces the stories of Vietnam's struggle for independence.

We see the US back France's colonial policy after WWII, instead of the Vietnamese ambition for independence.

Ho Chi Minh wrote to to President Harry Truman, February 16, 1945. The letter was never answered and was not declassified until 1972
DEAR MR. PRESIDENT:
Our VIETNAM people, as early as 1941, stood by the Allies' side and fought against the Japanese and their associates, the French colonialists.
From 1941 to 1945 we fought bitterly, sustained by the patriotism, of our fellow-countrymen and by the promises made by the Allies at YALTA, SAN FRANCISCO and POTSDAM.
When the Japanese were defeated in August 1945, the whole Vietnam territory was united under a Provisional Republican Government, which immediately set out to work. In five months, peace and order were restored, a democratic republic was established on legal bases, and adequate help was given to the Allies in the carrying out of their disarmament mission.
But the French Colonialists, who betrayed in wartime both the Allies and the Vietnamese, have come back, and are waging on us a murderous and pitiless war in order reestablish their domination. Their invasion has extended to South Vietnam and is menacing us in North Vietnam. It would take volumes to give even an abbreviated report of the crisis and assassinations they are committing everyday in this fighting area.
This aggression is contrary to all principles of international law and the pledge made by the Allies during World War II. It is a challenge to the noble attitude shown before, during, and after the war by the United States Government and People. It violently contrasts with the firm stand you have taken in your twelve point declaration, and with the idealistic loftiness and generosity expressed by your delegates to the United Nations Assembly, MM. BYRNES, STETTINIUS, AND J.F. DULLES.
The French aggression on a peace-loving people is a direct menace to world security. It implies the complicity, or at least the connivance of the Great Democracies. The United Nations ought to keep their words. They ought to interfere to stop this unjust war, and to show that they mean to carry out in peacetime the principles for which they fought in wartime.
Our Vietnamese people, after so many years of spoliation and devastation, is just beginning its building-up work. It needs security and freedom, first to achieve internal prosperity and welfare, and later to bring its small contribution to world-reconstruction.
These security and freedom can only be guaranteed by our independence from any colonial power, and our free cooperation with all other powers. It is with this firm conviction that we request of the United Sates as guardians and champions of World Justice to take a decisive step in support of our independence.
What we ask has been graciously granted to the Philippines. Like the Philippines our goal is full independence and full cooperation with the UNITED STATES. We will do our best to make this independence and cooperation profitable to the whole world.
I am Dear Mr. PRESIDENT,
Respectfully Yours,
(Signed) Ho Chi Minh

My uncle and I were both frustrated that the US stepped away from our values, as a country that fought colonial rule, in favor of Charles de Gaulle, bailing out the French again, beginning a tragedy that would consume five presidential administrations from Truman to Nixon, forever tarnishing the idea of the US as a force for good in the world.

Don't get me wrong, I love the food art sex and socialism of France.  And I recognize democracy is
ever flawed, needing to be reinvented anew every generation.

Still, this story of five administrations and years and years of lost lives lost is painful, reminding us how far back we've stepped.

But it is our history. The trauma of the history is hard to wrap one's mind around.  It impacts of our foreign policy, our distrust of the presidency, of the military, of presidents from Texas or for that matter New York.  It tarnished the War on Poverty of LBJ, who schizophrenically fought for civil rights at home, while consigning poor people, from the US and Vietnam, to death through years of war.

But what is their to learn of this?

Why did we let ourselves get caught up in this chaos?

Why did we give into hate instead of reason?

These are the questions we have to ask ourselves over and over again.

It has been said the original sin of the US was its involvement in the slave trade, followed by the genocide of the Native Americans, Vietnam and so on. Racism is our original sin.
And its lessons reverberate.
As Kurt Vonnegut Jr writes in Slaughterhouse Five: The Children's Crusade:
"The most important thing I learned... was that when a person dies he only appears to die.  He is still very much alive in the past... All moments, past, present, and always have existed, always will exist."

The war was grotesque.  But what fueled it through those many administrations?

Its hard to say but certainly that old noxious brew of hatred of otherness, of arrogance and ignorance allowed it grow.

And we are living with it in our current administration.  As  Ta-Nehisi-coates argues:

"I think if you own a business that attempts to keep black people from renting from you; if you are reported to say that you don’t want black people counting your money; if you say—and not even reported, just come out and say—that someone can’t judge your case because they are Mexican; if your response to the first black president is that they weren’t born in this country, despite all proof; if you say they weren’t smart enough to go to Harvard Law School, and demand to see their grades; if that’s the essence of your entire political identity you might be a white supremacist, it’s just possible."

On Monday, activists across town were fighting those sentiments.  The president was in town.  And Rise and Resist, an ACT UP modeled direct action group, was meeting at Grand Central Terminal to condemn the white supremacy that has fueled his administration:


"Rise and Resist Against White Supremacy

Trump will be addressing the United Nations' General Assembly on Tuesday, September 19th.

Join us as we Rise and Resist against the white supremacist policies of Trump, Pence, and Sessions.

On Monday/September 18th at 5:00 pm we will assemble in the main corridor of Grand Central Station to demonstrate our solidarity regarding racist issues such as,

By 5:30 pm we will leave the station and march outside (location to be announced, and posted here)."

They were fighting that impulse Monday, filling the Grand Central Terminal with noise, letting the world know that the hatred, the racism, the militarism of the Trump administration and its war mongering would not stand.  The lessons of war is often lost on those such as Trump, who did not serve, whose kids will not serve, whose family was not impacted.  Those who were impacted by wars know its living hell.  So they speak in measured tones. They try to avoid it instead of blustering,  threatening, and name calling as our president was doing at the UN.

Moving out into the streets, the police moved to arrest and intimidate those speaking out.

"The NYPD was aggressive with us from the moment we exited Grand Central and began our march to Times Square along 42nd Street. We were well organized and had over 20 marshals. Beginning with our crossing of 5th Avenue they began blaring their recorded (and poorly worded) admonition that we could be arrested if we walked on the streets. We had no intention to, beyond the crosswalk. As the final marchers finished crossing 5th Ave, and the marshals collapsed their line of protection along the length of the crosswalk, several officers grabbed 1 female marshal and immediately began handcuffing roughly. The one woman marshal was in her late 60s and was clearly frightened and in pain, so another female marshal demanded that they take her as well, so that the other woman wouldn't be alone in the female holding cell. This attack on marshals was repeated again after the 6th Avenue crossing when 2 more marshals and 1 marcher were grabbed and again after we made our final crossing into the Times Square triangle just south of the red steps when 5 more marshals were grabbed. Out of the 9 marshals and 1 marcher grabbed, half were in their 60s. Several suits and white shirts were clearly not in agreement with the action and verbally criticized it in our presence and gave us clear information about where they would be held, so that we were able to do effective jail support. Fortunately, one of our members present is an attorney and was able to intercede at 1 Police Plaza and make it clear that they had an attorney present on-site; but we were told by two different suits in Times Square that, barring outstanding warrants, all would be released that night. And they were. To be very clear, there was no CD aspect to this action. We marched on the sidewalk throughout, only pausing when the NYPD broke the march in half at intersections with the light changes. Throughout, we crossed intersections at WALK signs and did not try to disrupt traffic."

The whole scene reminded me of the Matthew Shepard political funeral of October 19, 1998, when the police blocked us from moving, arresting the marshals.

Jay Walker, who was at that action, compared the two: "Yes, the same strategy of going after marshals as Oct. 19. But with more marshals present to take up the slack of the first five arrested and generally older, more disciplined marchers, the chaos that occurred back then didn't repeat itself."

But the activists maintained their cool, condemning the racism fueling Trumps ascent, the hatred of the Vietnam war, the militarism behind the president's speech at the UN.   Activism is about love.  Harm reduction is about love.  Its important we remember that as we move forward through the fight.

Today, there is too much hate.  Too much greed.  Groups like Rise and Resist offer a rowdy, disobedient counter narrative. 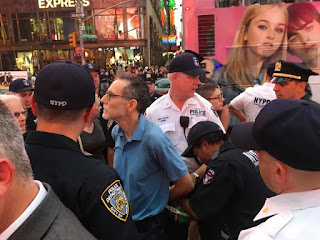 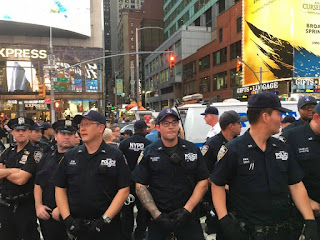 Lunceford took a photo of my friend Zack getting arrested. 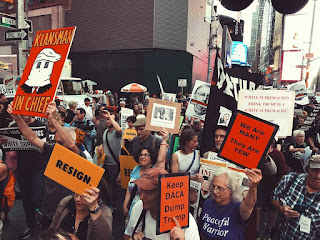 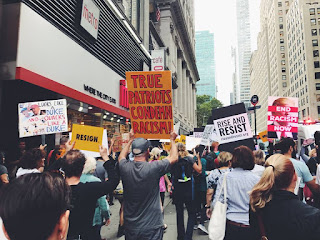 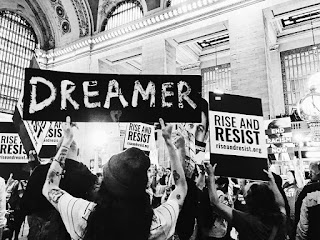 We came. We marched. We #RiseandResist'ed because that's what NYC does when Donald J. Trump hires actual Nazi White Supremacists & continues to embarrass our country on an hourly basis. #TheResistance won't stop until they're all gone. 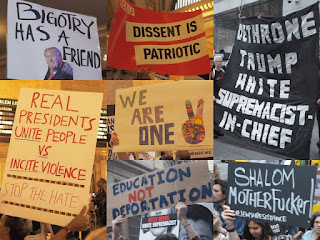 Peter Fahrni added this photo to the album: Rise and Resist Against White Supremacy.

Protest on the eve of Trump's UN address. September 18, 2017, NYC Police separated the protest at several intersections and made a small number of arrests, that looked like intimidation. This was a peaceful protest and demonstrators followed the rules. #Resist #RiseAndResist #dumptrump #whitesupremacyisterrorism


After getting out of jail, Jo Marcellaro wrote:

"There is nothing like being unexpectedly & aggressively arrested and then teaching the following day." 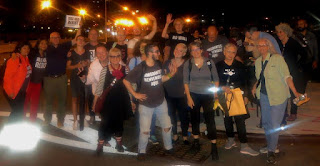 As usual, Erik McGregor, took wonderful photos, capturing the feeling and energy of the action. 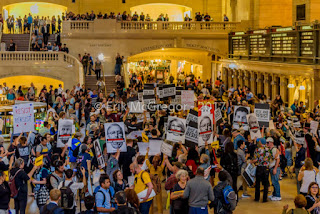 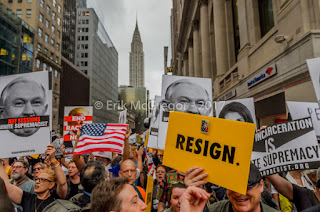 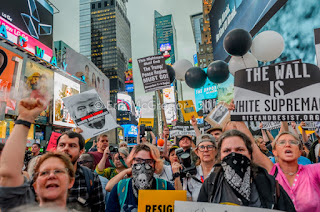 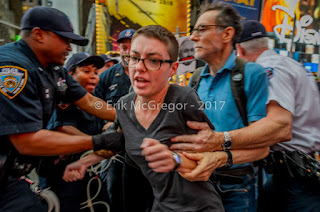 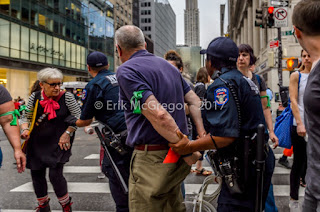 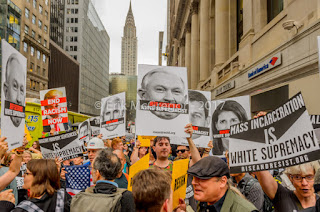 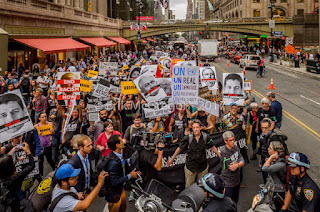 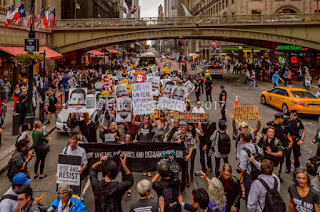 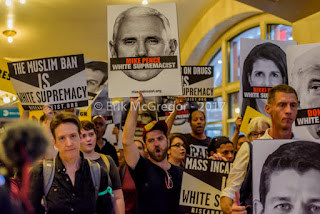 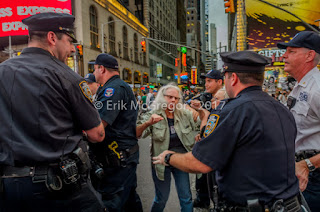 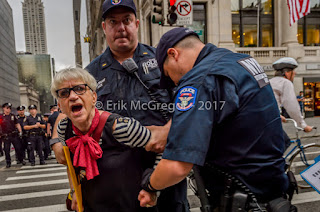 Happening in NYC right now. The Resistance showing the word that @realDonaldTrump is #EmperorHasNoClothes #UNGA 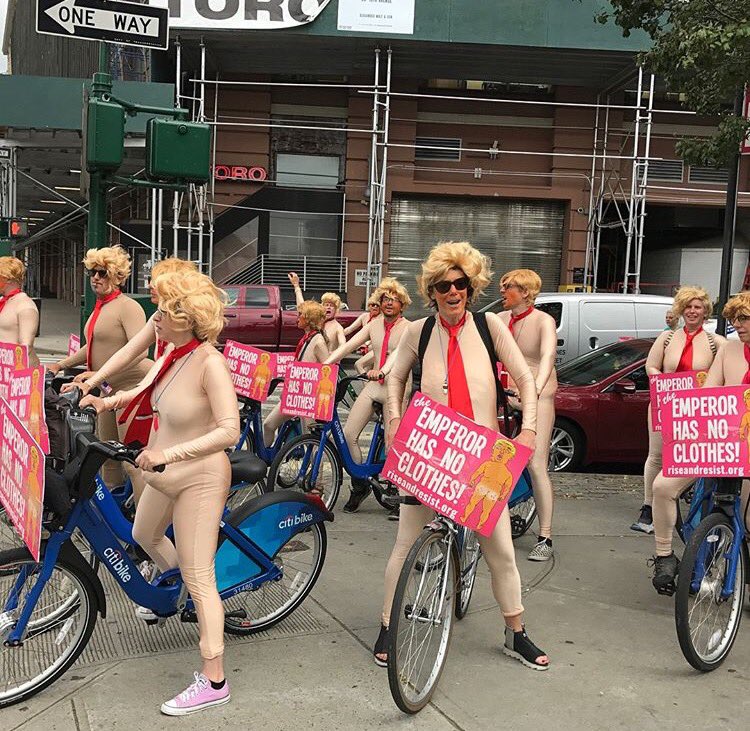 Posted by Benjamin Shepard at 1:49 AM