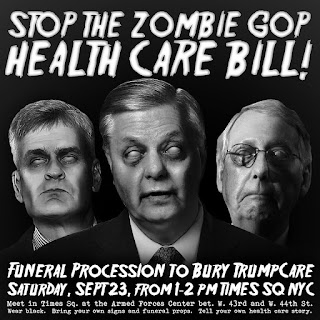 
Wear black.  Bring your own signs and funereal props.  Tell your own health care story.

Republican Senators are trying to take away our health care AGAIN!  Their new “Graham-Cassidy” bill is the worst yet.  It will repeal the Affordable Care Act (ACA), end Medicaid as we know it, drastically cut health care spending, and defund Planned Parenthood.  It also lets states eliminate many of the ACA’s consumer rights & protections that benefit everyone, no matter what kind of coverage you have.

32 million people will lose their health insurance, including over 1 million New Yorkers.  New York State will lose $19 billion in federal health care funds over the next decade.

Acting together, we stopped them from killing our health care twice already. This new bill is their last-ditch effort.  We can do it again!

The latest Congressional bill to repeal the Affordable Care Act (ACA) and dismantle Medicaid through permanent caps and cuts hurts women of all ages and their families. The Graham Cassidy bill would:


·         Raise costs for people by 20 percent or more each year for the same coverage.
·         Allow insurance companies to discriminate against people with pre-existing conditions including pregnancy, mental health disorders, high blood pressure, asthma, etc. Pregnant women may have to pay $17,000 more for coverage under this bill.
·         Cut health care funding for states by $4 trillion – including funding for nursing home care, care for children with disabilities, and mental health care—and shift massive burdens to state budgets. Florida’s budget would lose

Women will face even greater barriers under this proposed legislation because Graham Cassidy repeal:

·         Ends Medicaid as we know it by cutting federal funds to states for Medicaid services and coverage.  A majority of Medicaid enrollees are women; in fact, two-thirds of adults with Medicaid coverage are women. Medicaid is the largest source for reproductive healthcare, covering nearly half of all births in the United States and 75 percent of family planning services. Due to discriminatory systemic barriers, women of color disproportionately comprise the Medicaid population, with 30 percent of Black women and 24 percent of Hispanic women enrolled in Medicaid, compared to 14 percent of white women.

·         Stops Medicaid Expansion in states. Starting this month (September 2017) states will no longer be able to expand coverage to people who need it under the ACA.  States that expanded Medicaid cut the rate of uninsured women of reproductive age nearly in half between 2013 and 2015, so ending expansion takes women backward.

·         Allows insurance companies to charge women extra for essential health benefits that now are covered in under ACA plans including maternity, mental health, pediatric care, etc. Insurance companies could charge patients $28,660 more for having breast cancer, and $142,650 more for cancer that has metastasized. Just giving birth would allow insurers to charge a woman an additional $17,320 per year (compared to a similarly situated person who has not given birth), and it’s important to remember: four out of five women will give birth in her lifetime.
o   Black and Latina women face higher rates of many chronic illnesses, meaning these exorbitant costs will hurt the health and financial security of women of color the most. For instance, Black women are the group of people most likely to die from breast cancer. The ability to charge people more based on pre-existing conditions would permit insurers to charge a breast cancer survivor $28,660 more annually for insurance coverage. Without healthcare coverage, racial disparities in breast cancer rates could persist or even widen.

·         Imposes a national ban on abortion coverage in ACA exchanges. The Graham-Cassidy bill will force private insurance plans to drop coverage of abortion almost immediately from plans that currently cover it. In 2018, tax credits cannot be used to pay for a plan that includes abortion coverage outside of the instance of rape, incest, or life endangerment. At least 870,000 women will lose access to ACA marketplace insurance plans that cover abortion. 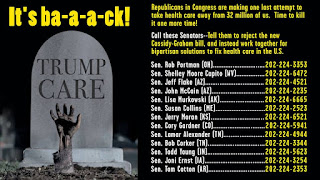 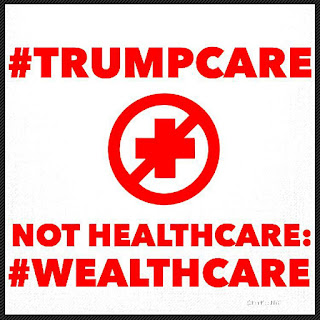 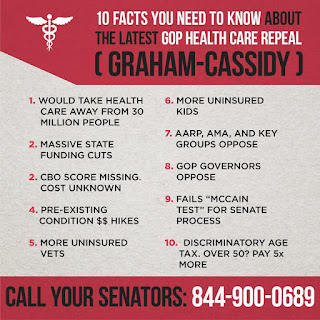 Posted by Benjamin Shepard at 8:29 AM